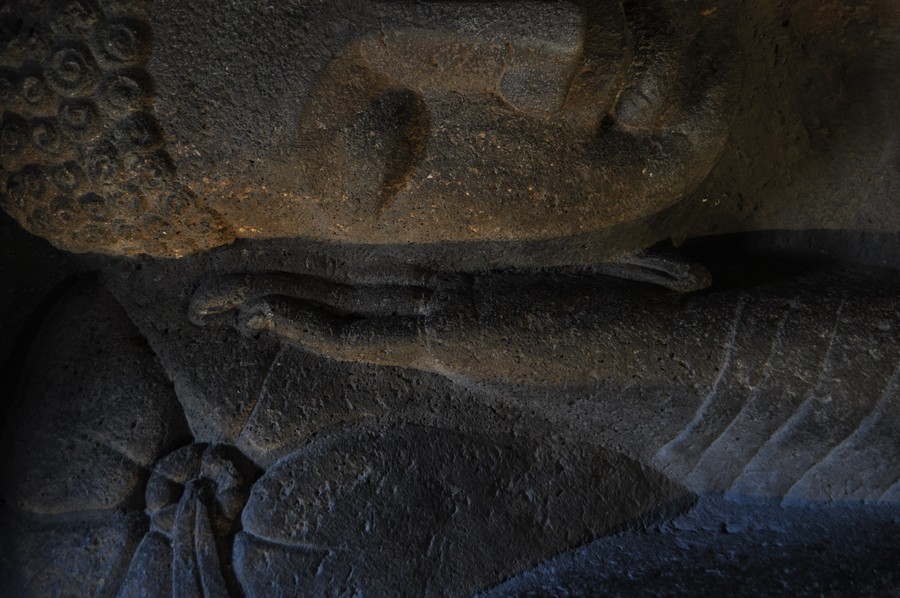 It is better to conquer yourself than to win a thousand battles. Then the victory is yours. It cannot be taken from you, not by angels or by demons, heaven or hell.
- Buddha


1814; in the depths of a jungle canyon in Maharasthra, a hunter walked alone. John Smith trudged in soundless step to the rattles and clicks of insects and hiss of distant waterfalls. He sought an equally elusive predator, roaming camouflaged in the untamed expanse: the Melghat tiger. As he pushed through greenery, he came to a sudden halt at an unlikely obstruction. There enshrouded in vines lay a stone doorway, carved straight into a volcanic slab. He gazed in awe; what detail! Statues peeked through vines, perched within little niches. Towering figures pointed inwards with a watchful eye upon the ominous entryway; a cave? He inched closer to utter darkness. What lay beyond? Was his striped predator awaiting him in the abyss? He stopped for only a moment's hesitation, cocking his rifle in apprehension, and entered.

Silence. To avoid a surprise attack, he lit his torch lamp. 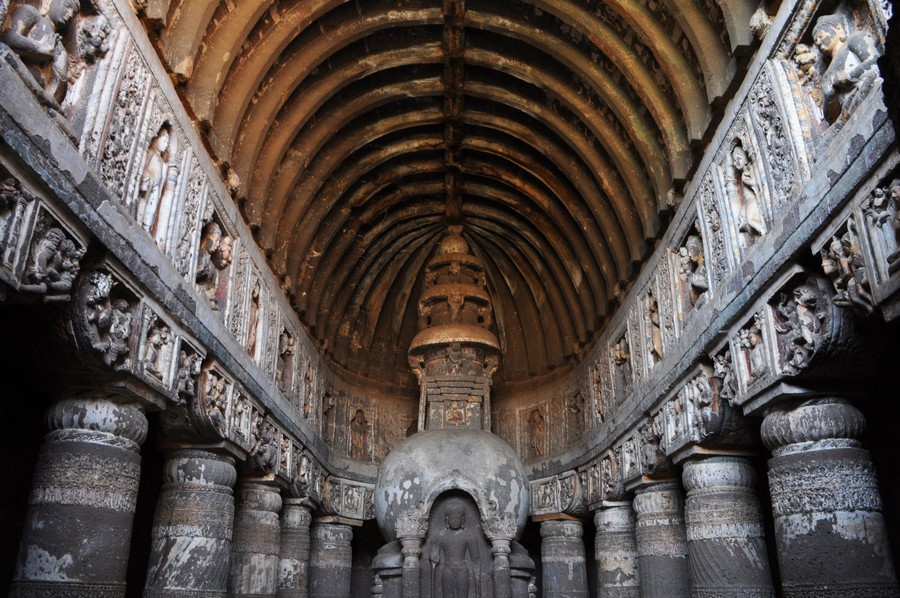 Nothing could have prepared John for what he saw, for something this magnificent was an unprecedented artistic feat. From the ceiling to the ground on which he stood were columns, statues, and ancient Sanskrit scripture. All had been carved straight out of the rock itself. No stone was placed, but carved from the cave itself. All was adorned in lavish paintings depicting a culture long lost in the sands of time. What was discovered by the hunter can only be compared to ancient epics and Indiana Jones. Little did John know that he had stumbled across something much more valuable than a successful kill, that over 2000 years ago an ancient civilization worked from the fuels of devout belief to build one of the most intricate and monumental pieces of art the world would ever see. John Smith had found the largest of the 29 Ajanta Caves (pictured above). 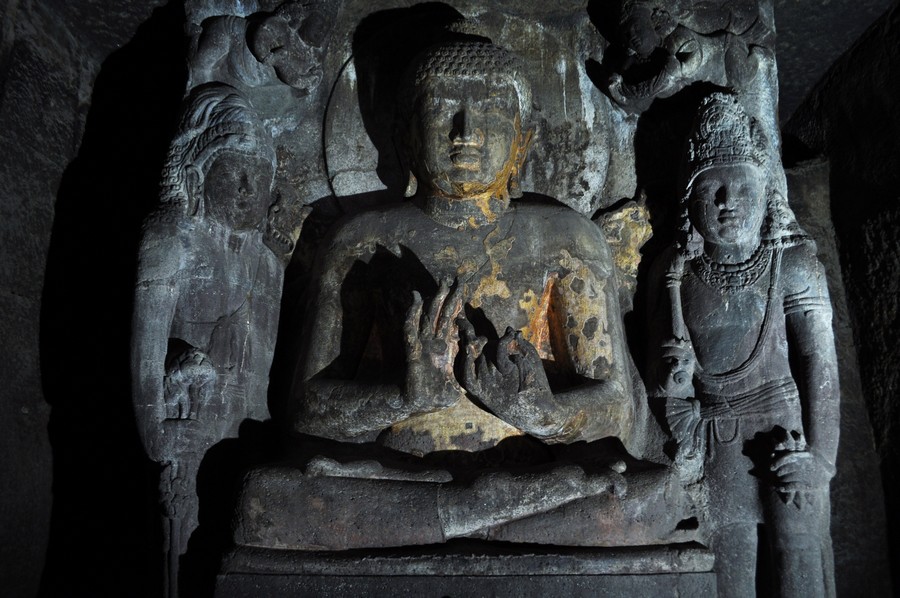 Founders of the Sri-Lankan form of Buddhism and the lower castes of ancient India's Hindu society congregated under the rule of the Satavahana dynasty in 400 BC to begin their work. Inch by inch, they hand chiseled away from the flat faces of volcanic stone, slowly creating the cave's outer dimensions. Through use of ancient mirrors and oil-soaked stick torches, they reached the deepest length of their cave sanctuary. This completed what would be the ceiling of the cave temple. Every piece of each cave was conceived from top to bottom. This included paintings as well, which are composed of ground flowers, herbs, animal waste, and other natural ingredients to make the fantastically complex multi-colored frescoes. As you look at the pictures below, imagine that each one of the ceiling/wall paintings, column carvings, statues and stupas were all designed as the artists worked their way towards the floor. Some of the caves are incomplete, as the Ajanta Caves were deserted around 460 BC (pictured directly below). 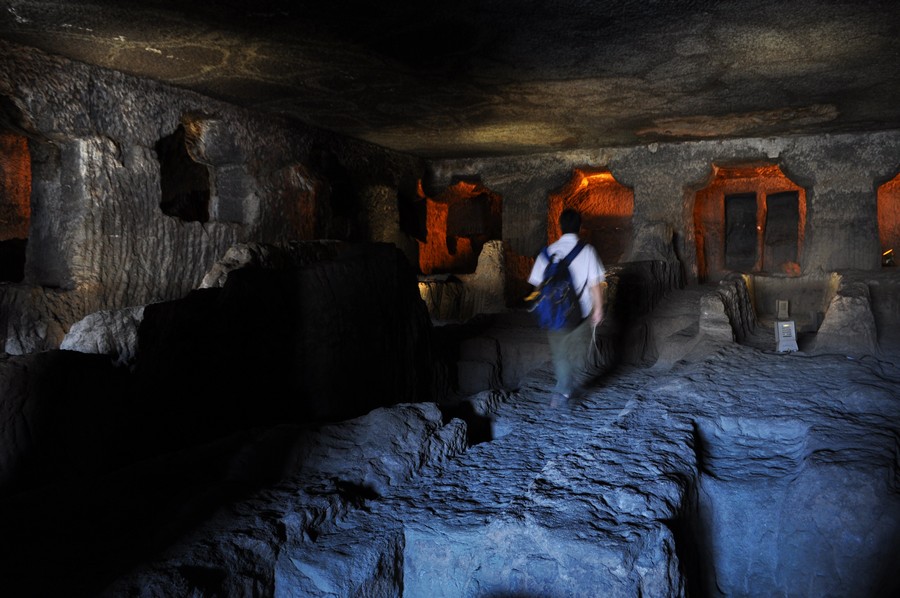 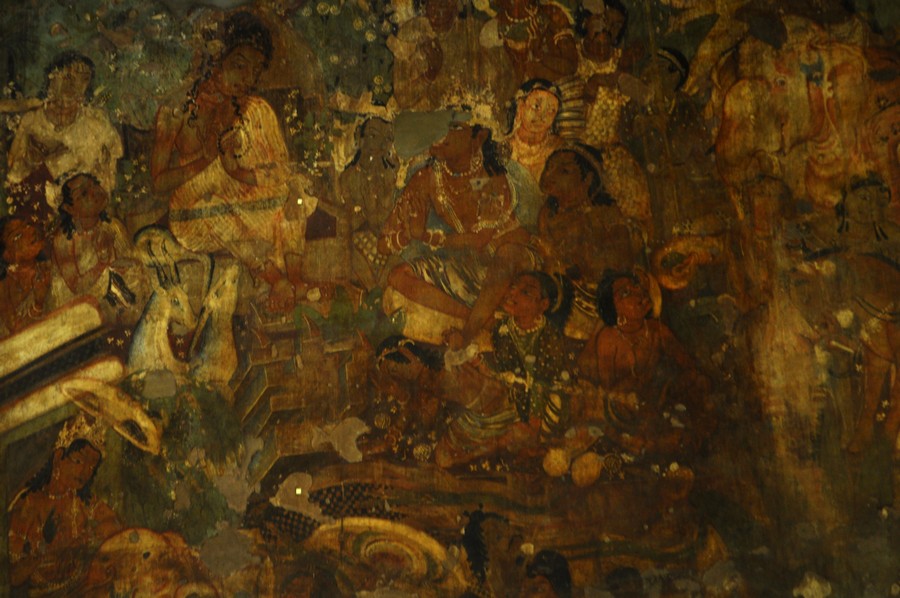 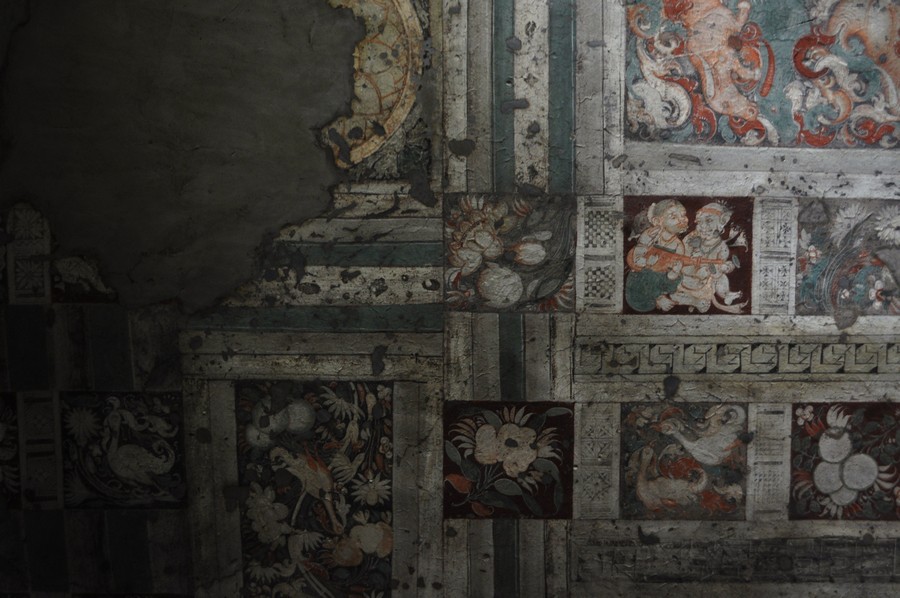 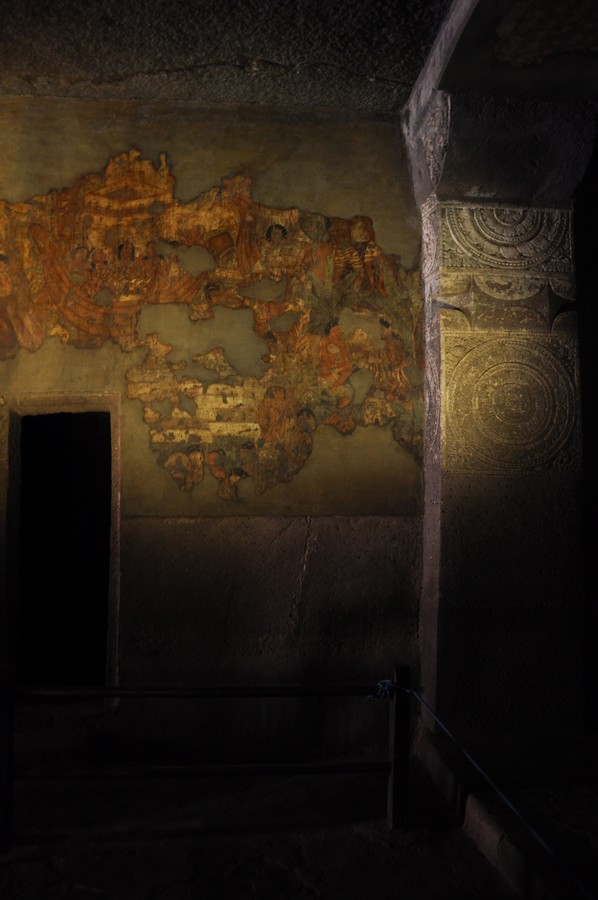 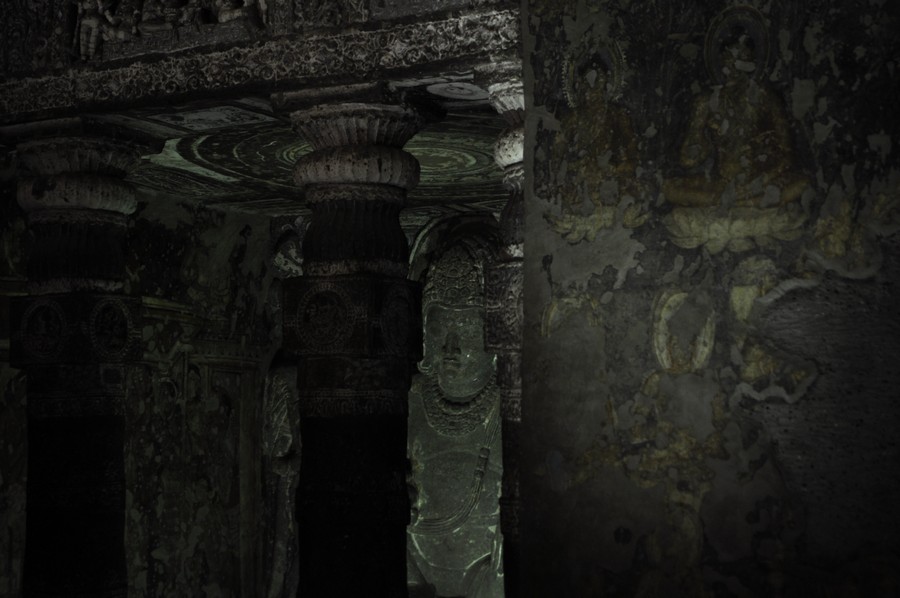 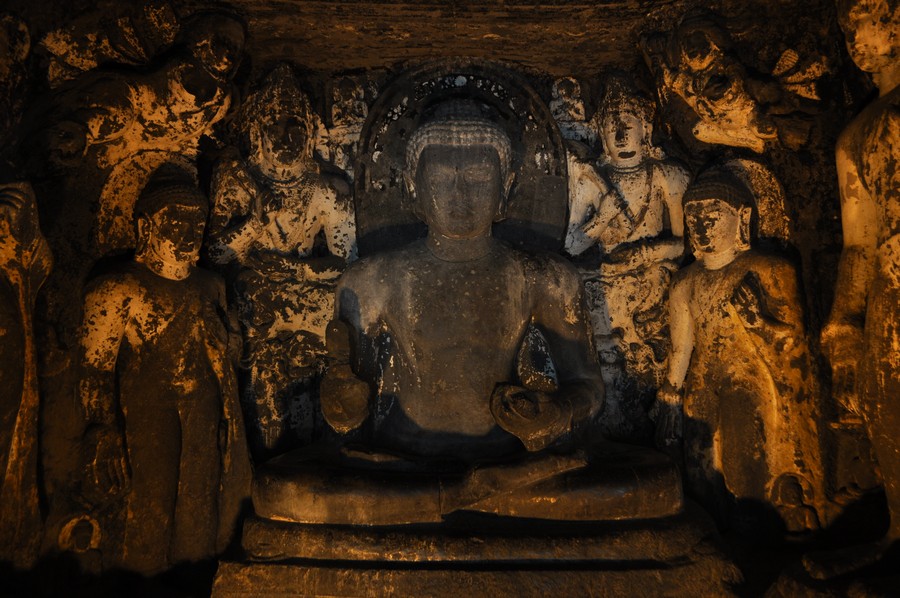 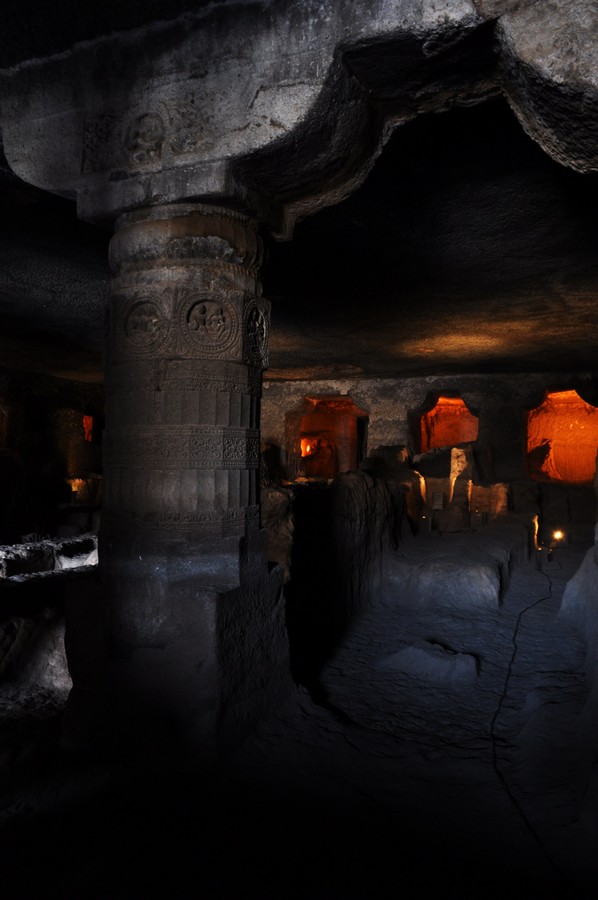 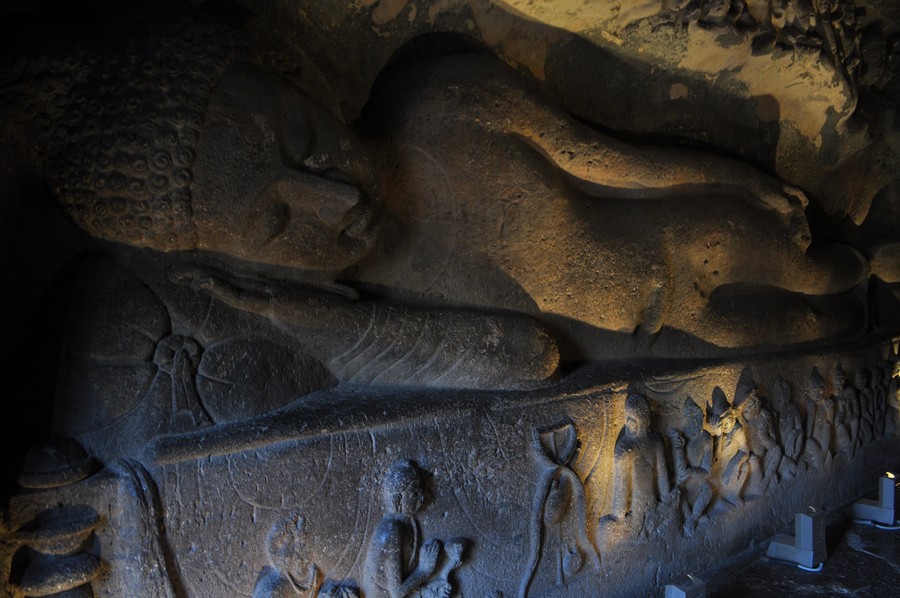 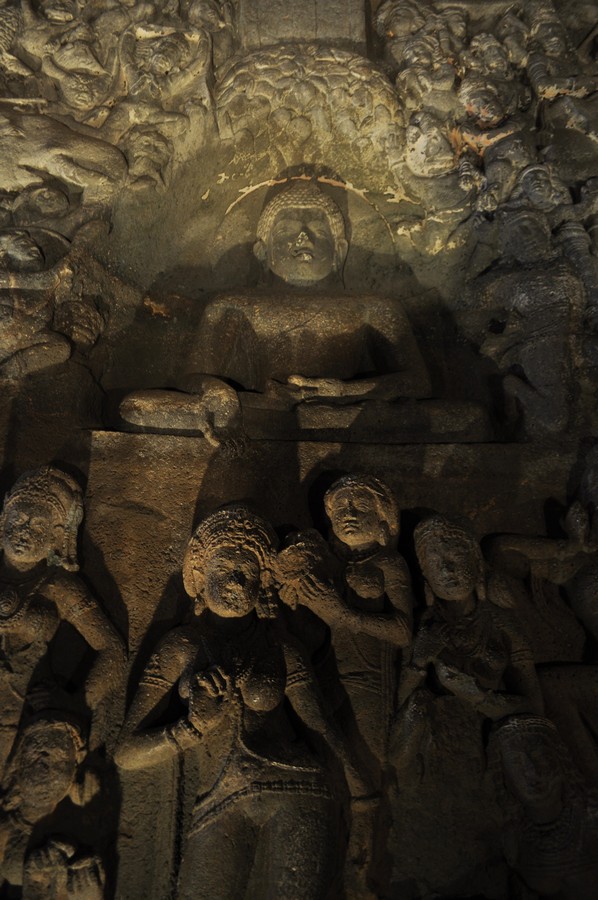 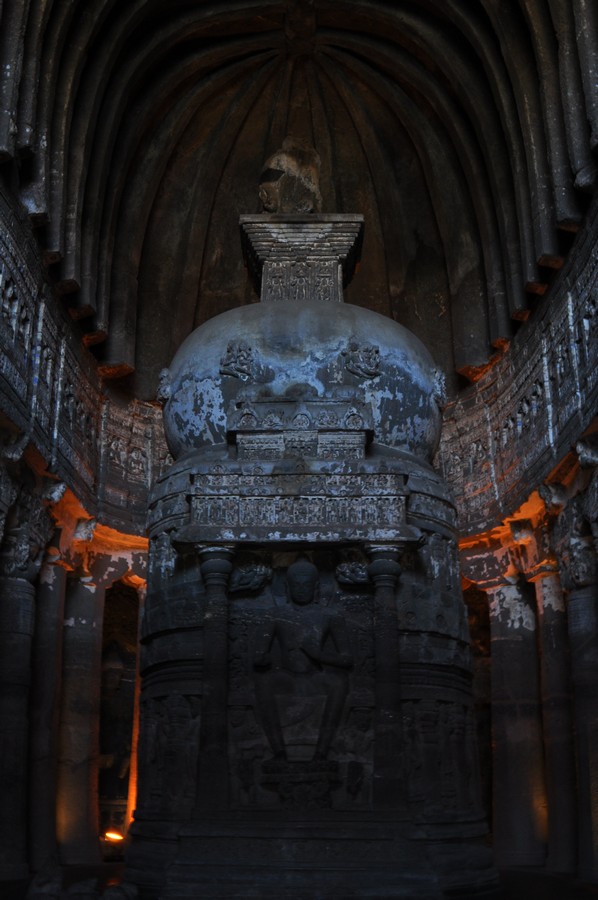 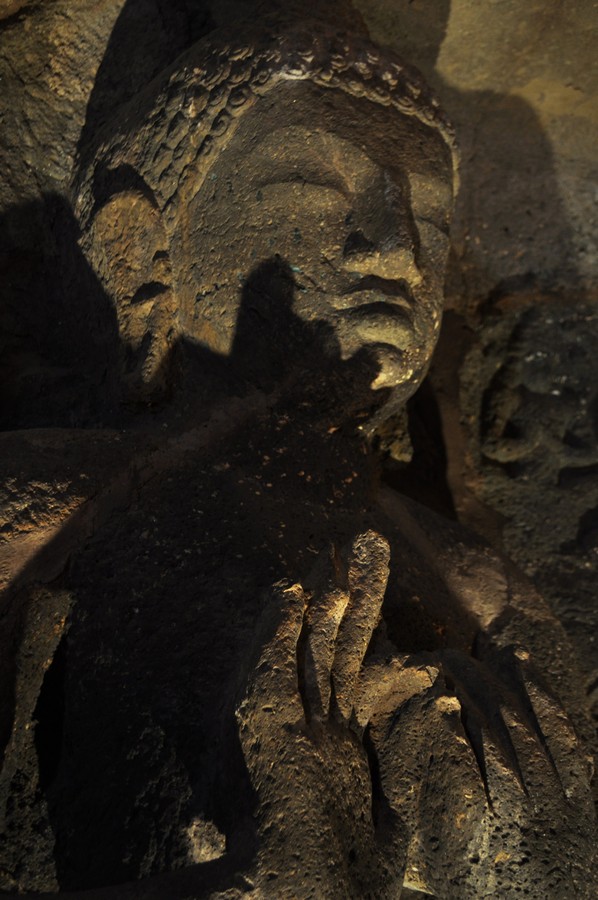 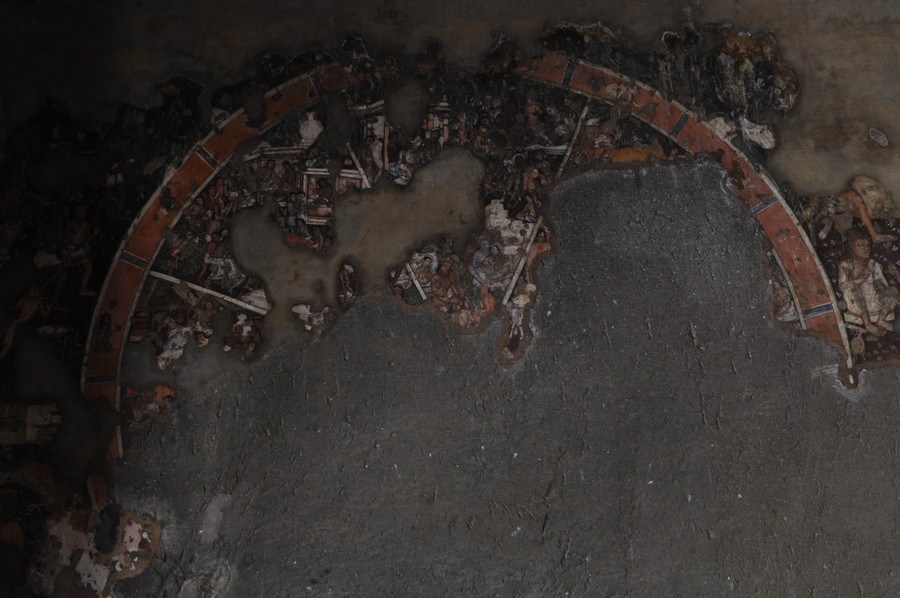 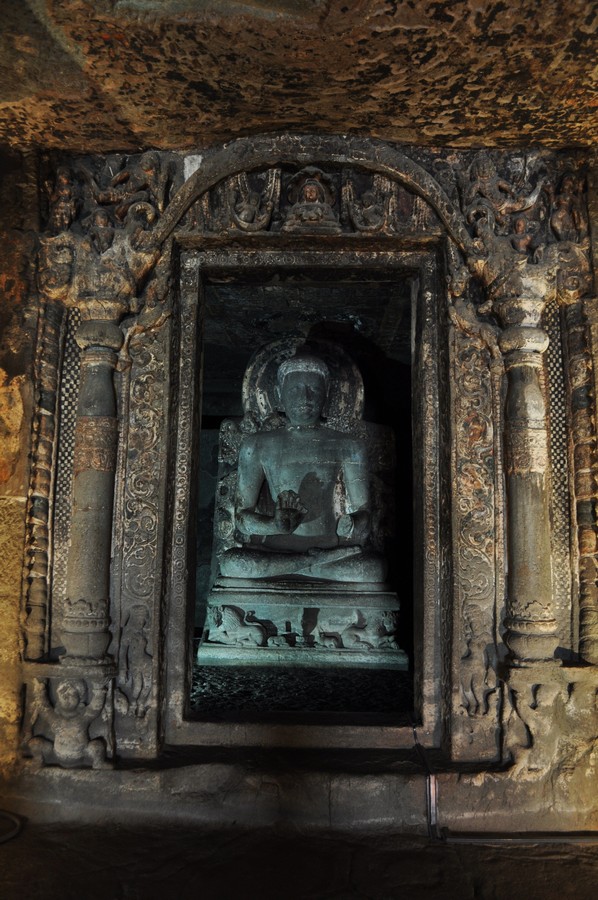 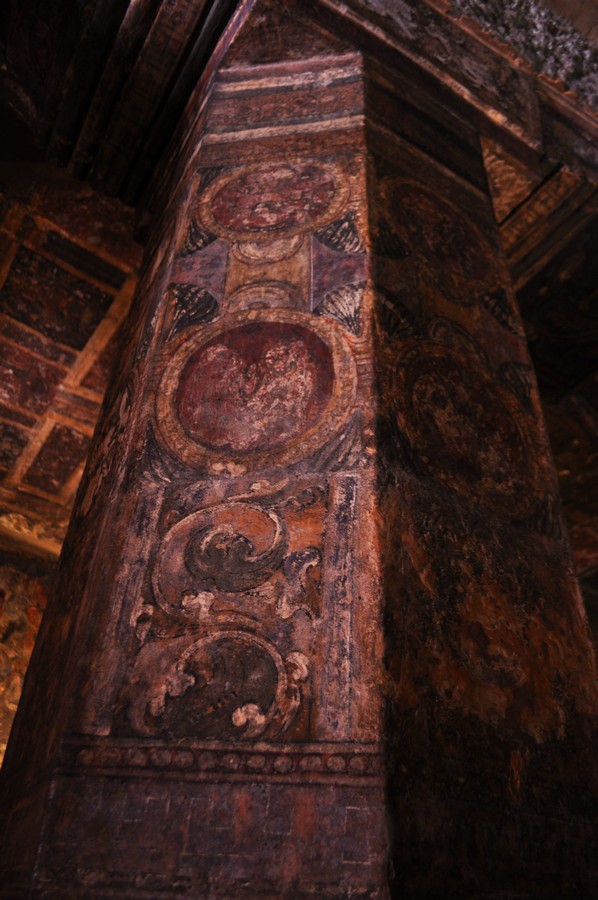 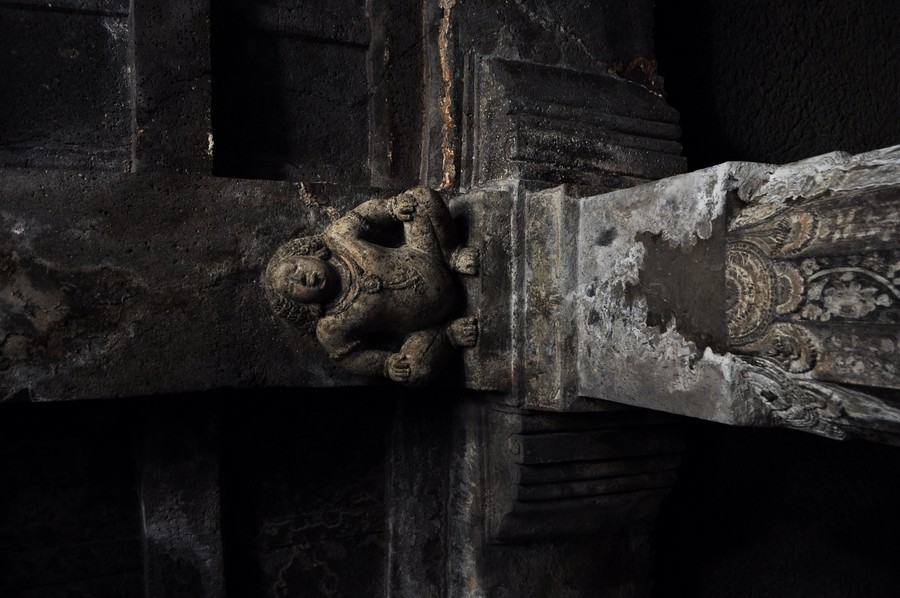 As I stood on the exterior pathway outside Cave #2 (pictured below), I saw a wave of tourists pile into Cave #1 inches behind their trusted tour guide. Intimidated, I swiftly fled to Cave #2. The recently installed door closed, and the commotion of the bustling crowd was left behind as quickly as the bright heat of the afternoon sun. Utter silence and cool temperature of darkness engulfed my senses. There I was, completely surrounded by thousands of watchful eyes from paintings depicting the Jataka Stories (the oldest Buddhist scripture) while awnings of sumo-like men strained to hold their respective capital (pictured above) sturdy against the heavy ceiling. And beyond it all, a statue of Buddha sat in praying posture, staring directly into my soul. I felt a surge of energy radiate from the mystical beauty. Was this what John Smith felt long ago, isolated from the wild Maharathi jungle 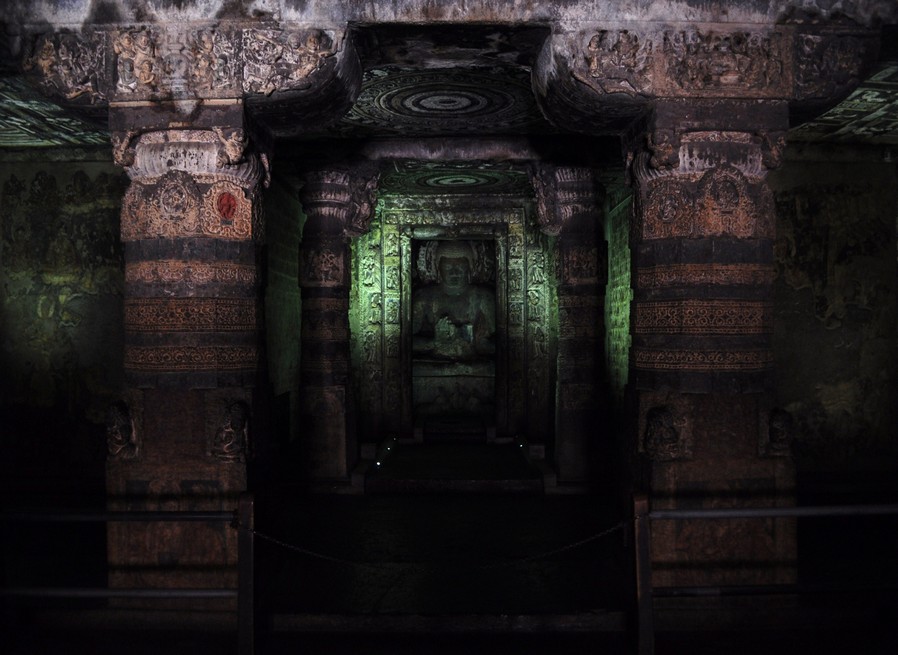 Experiencing this invaluable landmark depicting the birth of Buddhism 2400 years later was unforgettable. If anyone is to visit Maharasthra, they must, by any means necessary, visit the ancient Ajanta Caves.
Posted by bestoked at 1:40 AM