"This we know; all things are connected like the blood that unites us. We do not weave the web of life, we are merely a strand in it. Whatever we do to the web, we do to ourselves." - Chief Seattle


Dawn. I had been riding a tricycle decked with LEDs all evening with Andrea, Kyle, and Marina. Lucy had been with us all night, so we were still wide eyed and smiling in the 11th hour of our escapade. Laughing, dancing, and tricycle chariot riding (as both the driver and "chariot rider" in the rear basket of the trike) past massive music camps, around art pieces, and alongside mutant vehicles was a wash of a memory, but a very good one! All came to an end as we hit the shield of sorrow, serenity, and silence enshrouding the Temple of Transition. We were giddy beyond measure, so it's power only lightly touched our spirits to calm our senses. It was time for a sunrise.

We sat together, beaming at a magical moment soon to arrive. I came prepared. Knowing that our journey would end with the greeting of a new day, I brought headphones and an iPod. Marina and Andrea hadn't prepared as much, so I decided to leave the gift to them: a song worthy of an epic sunrise. As the world brightened, shapes of people became more distinct. New and old forms of connection could be seen manifesting. A couple wedded. Friends chuckled, muttering  Fire dancers welcomed their rising superior. Most sat just as we were, the Playa stretching out into desolation, art pieces dotting the horizon... and a string of balloons.

The chain of bouncing floating balls of helium stretched off and away so far that the end was out of sight. I couldn't believe how long this chain of balloons was! Of course, after searching for its end along the outer rims of the Playa, I gave up. But where did it begin? 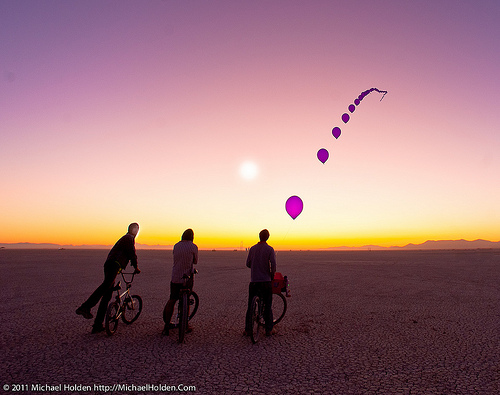 One normal-sized mountain bike held surely several hundred balloons at bay. As a child I remembered loving walking along car dealerships and underneath their large arcs of balloons. This put them all to shame instantaneously. I was a child again. All of the sudden, beams of light shot from the edge of a distant desert mountain. The suns rays shot out above us, and as they did, the balloons rose. Up and up into the sky they went. At the same time, the man began to ride, off into the Playa with a chain of balloons tethered to his front handlebar. People cheered and danced, embraced, kissed. Joy, the purest of joy was all that existed. Tears, smiles, hugs were shared with friends and strangers all around. But as the sun rose, our energy waned. A good days rest was needed.
Returning from an unforgettable sunrise left me feeling nothing but amazing. However, everything changes quickly on the Playa, and it did as I arrived back at camp. Jilly was waiting with other camp members when Andrea, Marina, and I returned. Our childlike giddiness had already dwindled from our tiring walk back from the temple and the quickly rising desert sun, but the moment I saw Jilly's face my wonder world shattered. In the chaos of awesome that was last evening, I had lost her. I had wandered off into the sea of stimulation, never returning until this moment to find her completely devastated.

She wanted so badly to have spent the previous evening on an adventure with me, and I had destroyed that opportunity in a single swoop by losing sight of our promised meeting point. A smile that had been glued on my face for hours was quickly dwindling to sadness brought forth from how much my carelessness and impatience mattered now. I sputtered a few awkward responses to the crushing questions she posed about my time last night, and after several pointless responses stormed off to the temple with all intention to be as far away from me as possible.

This is a turning point. The relationship is doomed. I am such an asshole. I am again going to loose consciousness. I should lay my head down to rest before talking about anything... but then she is gone and I am forever emblazoned as the piece of shit who deserted her at Burning Man. Wrong, I made it clear that this might happen, I don't have to do anything. I don't have enough water in me... but if I don't do something now, our Burning Man experience is ruined. If I don't resolve this, my Burning Man experience is ruined. The thoughts were endless within the first split second that I observed the misery written across her face, but as she whisked past fuming in anger and disbelief at my actions, I turned on a dime and began to walk from where I came.

To Build a Home [The Cinematic Orchestra] by Andrew Gavin Williams

The sun continued to rise without a cloud in the sky, but Jilly was ice cold to every word I muttered. I volleyed back my best response in the midst of defeat, exhaustion, dehydration, and starvation. The conversation quickly turned bitter on my side as I reminded her what I was doing in an effort to resolve our conflict, reliving my evening journey to the temple in the dead of the morning sun, completely absent of any nutrients or moisture to keep me going. Little did that help, especially after seeing such a smug smile on my face during our reunion at camp that probably screamed “I had such an amazing time last night without you around and I can't wait to tell everyone about it.” In a medley of anger, frustration, guilt, compassion, and love, I snapped and exploded about how hopeless I was becoming. It was a pointless effort that left me even more delirious and absent of valuable energy at least a mile from the temple and left Jilly feeling no better about our situation.

Then came that moment in many arguments/conflicts/resolutions in a relationship where everything was awkwardly silent... but with the added desert feature. Even though we had both agreed this may happen before arriving, even though she had all the right to guilt-trip me for ditching her on our special evening out together, even though I was fuming from not knowing what to do about ultimately feeling like a piece of shit, we had to figure this out. It was all true what I had said in my mind after seeing Jilly's face back at camp. We had to resolve, or our passionate characters would leave this messily splotched across the upcoming memories to be made at Burning Man, together or not.

At this point I had to stop talking and just trudge. Jilly knew I was low on energy and respected the silence, however awkward it may be. We didn't want to be around each other, but we did at the same time. We didn't hold hands, we made no moves of affection, we just walked. A pirate ship bumbled by; it spawned no awe in its extravagance. A man in nothing but a tutu and a sombrero tinkled by on his bell-equipped fuzzy bicycle; he brought no laughs. An eternity and a half later, we reached the temple. I had sunk to a greater low in the silence, and was losing concentration on pretty much everything, but the temple brought back my emotions tenfold.

All across the temple stood the last words to those lost. Jilly and I meandered, reading the powerful words of counterparts; messages from a sister to a brother, a son to a father, a daughter to a grandmother, a friend to a friend. For a moment, I trailed off to linger upon one message that brought a surge of tears and emotion, causing me to turn and reach for Jilly. But she was gone.

I had lost her again. How could I be such an idiot! How could I trail away from her just to read a message from one that had already lost their significant other forever? I stood my place in complete failure. I had come all this way with no food, no water, no energy in the hopes of resolution, and now there was nothing left but myself. Above all, my serotonin was quickly dwindling in the midst of a temple of the highest emotional fluctuations: a couple being married, a woman tear-staining her ink-inscribed message upon the wood, the crescendo of the massive musical instrument within, fire dancers greeting the rising sun, laughter amongst a group of friends. And me, alone.

Helpless to my carelessness, I trudged again, defeated amongst such emotional clamor. More weeped and more wedded as my shriveled spirit shuffled past, completely stripped from that rooted self I had thought I knew so well only a few months before. No tears came with my heart now separated again from its counterpart. My body swayed in all directions, but no confidence assisted my search. I was back on the train to Mumbai, but no Fazal would grab my hand to lift me. I belong down here for what I have done. It's time I went back. I am so sorry, Jilly, and all I wish is to be able to hold you like none of those mourning can do again. And just as I had finished inscribing my final words to Jilly in my mind, I saw her.

She was lost and alone just as I was. She would take a few steps and then stop. Her hands twiddled in worry, her face spoke the defeat I had fallen into moments before. She was only 20 feet from me, but I was invisible to her desperation. And even with how terrible I had been to her only last evening, I knew all she wanted was the same thing as me. I watched her only a few seconds more, because by then she had reached rock bottom as I had. And just as I saw her hopeless slouch, I gently approached from behind and embraced her.

We didn't say a word to each other. We just stood there in the center of the temple, and watched. In the ambiance, all frustrations, all differences, all conflicts were obliterated. Again, as so many moments before in the year of 2011, I was basking in gratitude. This time I was not alone, but with someone equally thankful for my presence as I was theirs. All around, so many people were forever departing with their loved ones. They would never again be gifted that simple yet invaluable presence we had just then. But even with that difference, all of those at the temple that day had one thing in common. It was time to let the past be as it was. The moment we drove through the entrance gates, this city presented itself as one complexly connected organism of infinite potential and happiness. Even as we were enshrouded in the lowest of our lows, there was something there on the Playa to help us both endure and soar beyond discouraging experiences that occurred only moments before.

Our apologies were met in equal form. Jilly and I walked back to camp as the sun approached dreadful high noon temperatures, but it didn't matter as it had. We were offered some ice-cold water from a passerby, and Jilly found a forgotten bag of her trail mix in the bottom of my Camelpak. Soon enough, the emotional shadow hanging over us had dissipated, and nothing mattered more than her company, the bag of trail mix, and the infinite world of the Playa before us. It was going to be a great day.
Posted by bestoked at 8:30 AM