"It is wonderful, the power of a faith like that, that can make multitudes upon multitudes of the old and weak and the young and frail enter without hesitation or complaint upon such incredible journeys and endure the resultant miseries without repining. It is done in love, or it is done in fear; I do not know which it is. No matter what the impulse is, the act born of it is beyond imagination, marvelous to our kind of people, the cold whites." - Mark Twain, 1895
Ustad Allauddin Khan - Raga Chhayanat - Baba's Enchantment by bestokednow
Kumbh Mela

In ancient Vedic scripture, it is said that the Kumbh Mela (literal meaning: "pot of Immortal Nectar") was churned from the waters of the Ganges by the demigods of the universe. An agreement was made between the two factions of supernaturals. The Kumbh Mela was to be split to maintain a balance of power. Yet upon its creation, battle ensued for 12 days (12 human years), with the demons hoping to acquire the Kumbh Mela's power all for themselves. Lord Vishnu managed to escape with the "amrit" (nectar of immortality), yet in the process four drops were spilled at four different locations: Ujjain, Nasik, Allhahabad, and Haridwar.

However, there is one that stands above them all.

The Maha Kumbh Mela, the "Great" Kumbh Mela. The Great Kumbh Mela occurs once every 144 years and was just recently held in 2001 at the traditional location, Allahabad. The picture above is a satellite photo of the 2001 Maha Kumbh Mela. I recommend clicking on the picture itself to get an idea of just how big this festival is.

Over a month-long period in 2001, Hindus began their pilgrimage across hundreds of miles of the subcontinent to partake in the churning of the sacred Ganges, a reenacting of the creation of the amrit. Every inch of the photo is the Maha Kumbh Mela. That year, 75,000,000 attended. Yes, I'll say it again, 75 million. The 2001 Maha Kumbh Mela still remains the largest human gathering ever recorded in history.


Even for his time, Mark Twain witnessed an unforgettable, unmatched site of human devotion. 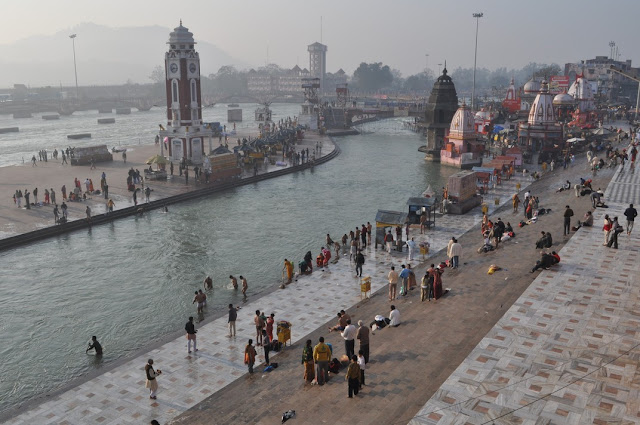 Haridwar is known as one of the oldest living cities. It is considered one of the seven holiest cities of India by Hindus, and the streets still saturate immortal nectar today into all who wade in the rushing waters of the Ganges. It hosts a Kumbh Mela at this very moment. Yet, even when a Kumbh Mela is not in session, the city draws a steady wave of pilgrims across the subcontinent as a place of purification in the sacred river Ganges. The city is also home to a set of ancient family archives wherein some Indian families can trace back over 7 generations.

Upon arrival, Nick, Bert, Matt, and Azzar immediately jumped at the opportunity to take a dip. As much as I wanted to join them, I had come in a t-shirt, shorts, and beanie to a cold, blustering wind that reminded me of San Francisco. It was hilarious watching them plunge into the holy waters, and they emerged washed clean of the soiled seats/beds on the second class sleeper train the night before. 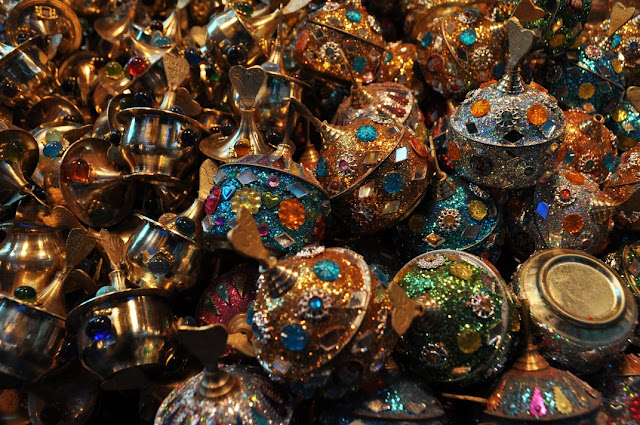 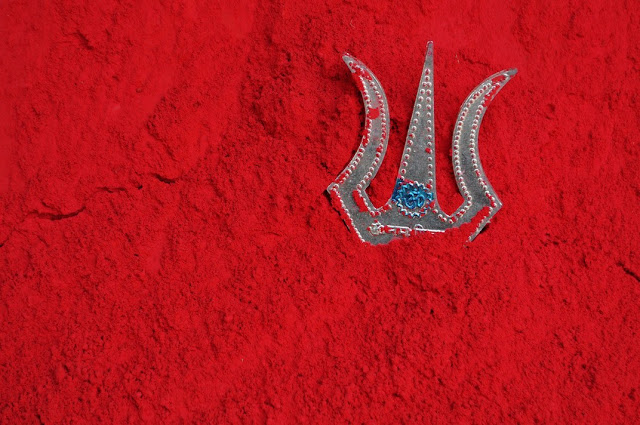 As the morning moved on, we took an open-air gondola to the top of a small maountain that overlooked Haridwar and the surrounding area. According to the story of Kumbh Mela, Lord Shiva used this mountain to churn the waters of the Ganges and brew the "amrit" (immortal nectar). Atop this mountain now stands a small Hindu temple, which proved to be one of my least enjoyable visits on holy ground. As soon as I entered the temple path, I was stopped 4 times and almost demanded to donate to each of the shrines. As much as I thoroughly respect their religion, I had already spent a sizeable amount of rupees in a distance of 50 feet through. I found out not less than 100 yards later that the temple had ended, and I was asked over 10 times for donations. 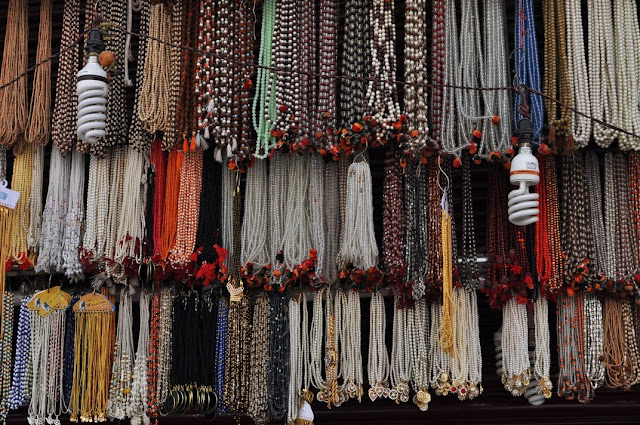 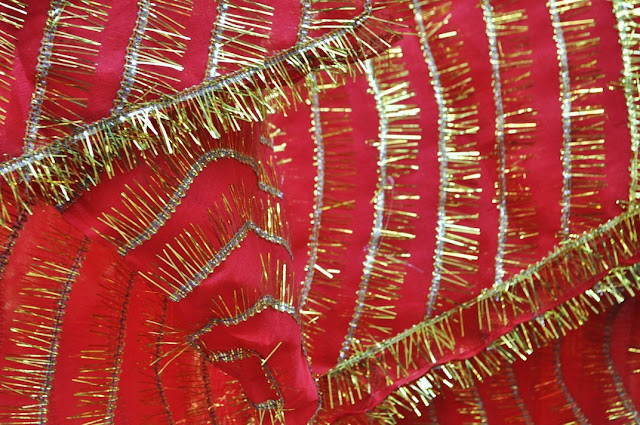 To an extent, I can understand the offerings that are expected while touring a temple like such, but with not much to offer back to the passive observer of such a religion it was extremely disappointing. Disgruntled by the heartless demands for monetary offering, I took the gondola down to Haridwar and made for a swift train ride to Rishikesh. 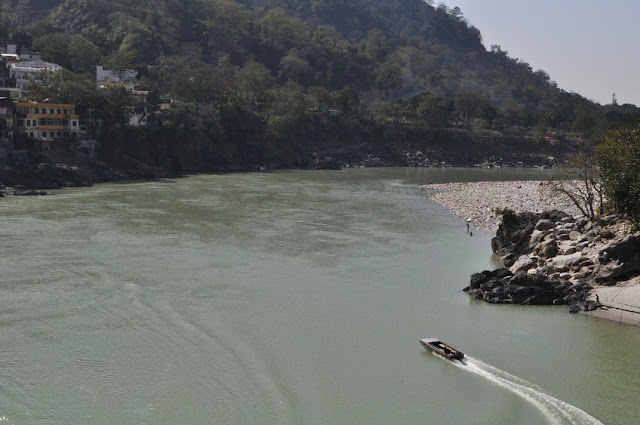 Ashrams, German Bakeries, the Beatles, and yoga babes. All this and more brought love for the city of Rishikesh. I had read about the Bombay Guesthouse in a guidebook, and decided that for 150 rupees (3 dollars) a night for a double bed was well worth the stay. Simple rooms left us adjacent to some great parts of town. 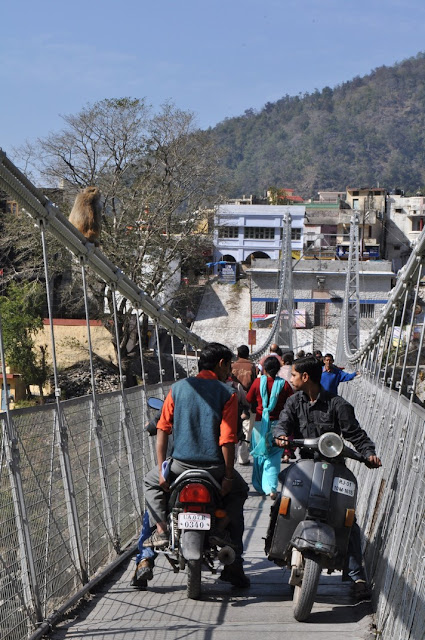 Just across the street, a large suspension bridge spanned the Ganges. Today, its used by pedestrians and motorcyclists (illegally) alike. Thousands of years before, it is said that Lord Shiva crossed this bridge and requested the Goddess Ganga to descend to the Earth. Yet, the power and weight of Ganga herself was so heavy that she trickled through the hair of Shiva and down into the Himalayas. What an epic entry into the human world... 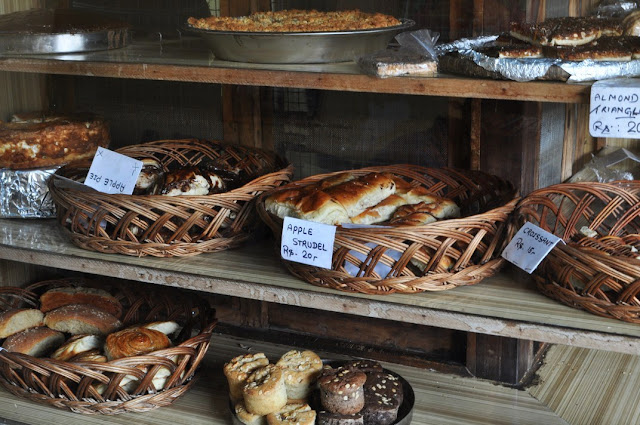 Dervaj Coffee Corner; as much of a supertourist as I felt eating at this place for every single meal, I couldn't divert my appetite from anything but homemade bread and pastries. Nostalgia for cinnimon rolls, apple crumble/pie, chocolate croissant, and cheesecake made eating at Dervaj an easy choice over anything else for breakfast, lunch, and dinner. And what beats being only a walk across a massive suspension bridge 200 feet over the sacred Ganges for every meal? Most righteous indeed...


Besides the current accredited fame of several ashrams open today, Rishikesh is also home to the Maharishi Ashram, the historic location of the Beatles' journey through the mind, body and soul. In 1968, all four band members and their partners visited Maharishi Mahesh Yogi for training in transcendental meditation. The four held a deteriorating attendance rate, and all for strong varieties of reasons. 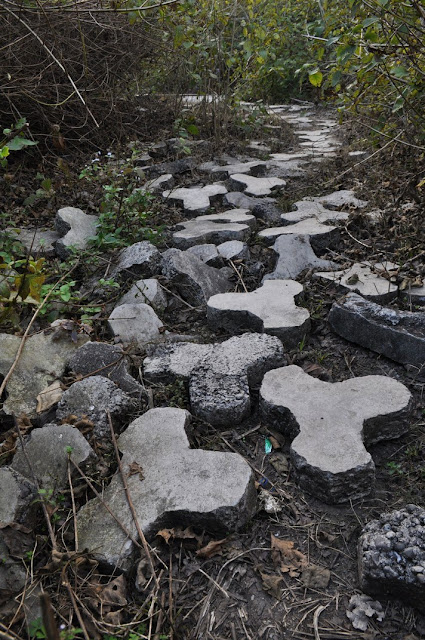 Paul Mcartney ended up leaving the ashram quite early in what was planned to be a multi-week visit. Though Paul's reasons for leaving were difficult for me to find, there is plenty of information on John Lennon and George Harrison's abrupt departure. At a certain point in their stay, Lennon received shocking word of Maharishi making suggestive moves towards very young women in the ashram. Maharishi, who claimed celibacy, thoroughly troubled Harrison when Lennon shared this information. Other controversy included supposed smuggling of chicken into the ashram, an extreme contrast to the ayurvedic eating habits of Maharishi. Lennon and Harrison were convinced of these concealed and decided to leave saying "you're the cosmic one, you should know" soon after their discoveries. 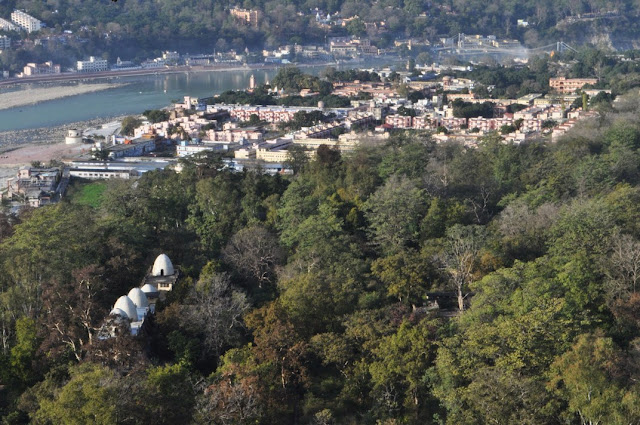 Whether or not these issues with Maharishi were true is still widely disputed, yet one cannot deny that some great Beatles hits came out of Rishikesh. Almost the entire White Album and some songs from Abbey Road were written in the peaceful location just out of town. Today, the ashram is abandoned, covered in the overgrowth of the creeping jungle forest surrounding the compound. Our journey out towards the ashram started on a very complex, elongated path that ended up being the complete wrong direction. However, we all ended up on a large hill with a beatiful overlook of Rishikesh below, as well as the true location of the Maharishi Ashram. 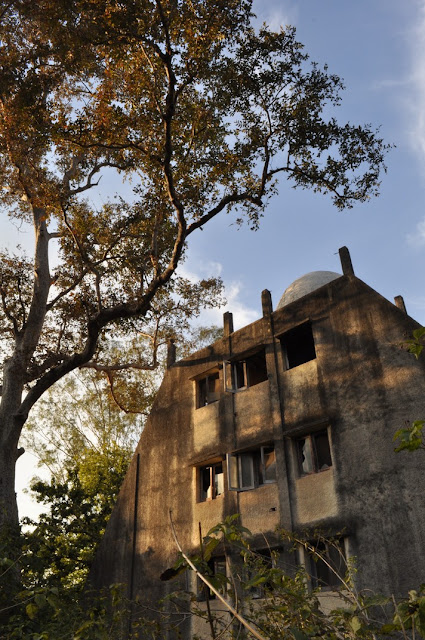 By the time we stumbled down the mountain and through some dense brush, we had lost half our group as they doubted the ashram would be down such an unused path. But lo and behold, Anya, Bert, Nick, and I walked right over a ruined back wall to the Maharishi Ashram just minutes later.


I have a really strong liking for abandoned buildings especially when they are covered in greenery. We had earlier observed the large white domes above from the top of the hill and decided to check them out in detail. It turns out that the domes were large resonance chambers! 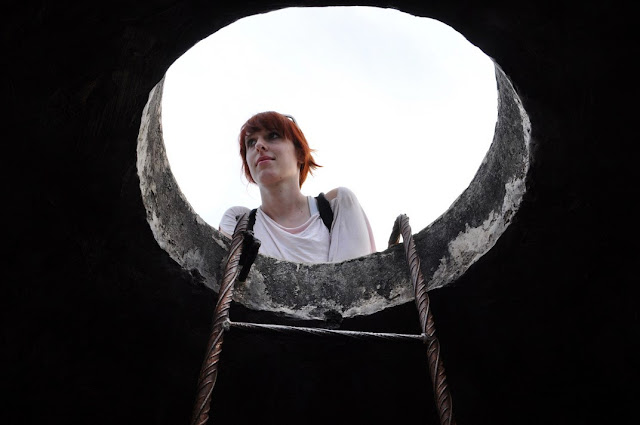 I wasn't a firm believer in the idea of "Ohm" before I arrived in Rishikesh, but I have to say, standing inside this small chamber and feeling the intense resonance that occurred from my own voice in perfect tune with its surroundings was enough for my body to ring with the sensation of such an incredible sounding word. My entire body shook at the resonance of the room, and my voice. 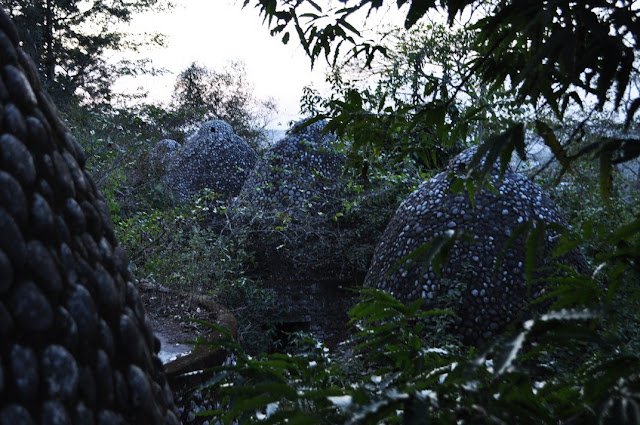 There's a whole lot of ganja in Rishikesh, but I felt similar serene beauty and comfort of Rishikesh with its abandoned jungle ashrams and chakra-stimulating resonance chambers. Oh yeah... and Bungee Jumping facilities. 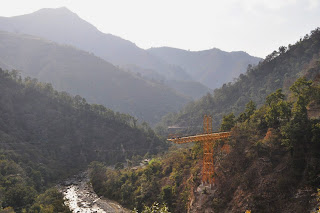 About 15 km from Rishikesh into the mountains, a multi-millionaire from Mumbai who spent years doing extreme sports in New Zealand built a state-of-the-art bungee crane. Out from the side of a mountain, the bungee platform stands a full 83m (250ft) above the ground. If someone is going to show me a system built by professional civil engineers less than a year ago, run by jump masters from New Zealand, and less than 30 bucks a jump... there's absolutely no way you're going to hold me back from plunging off. 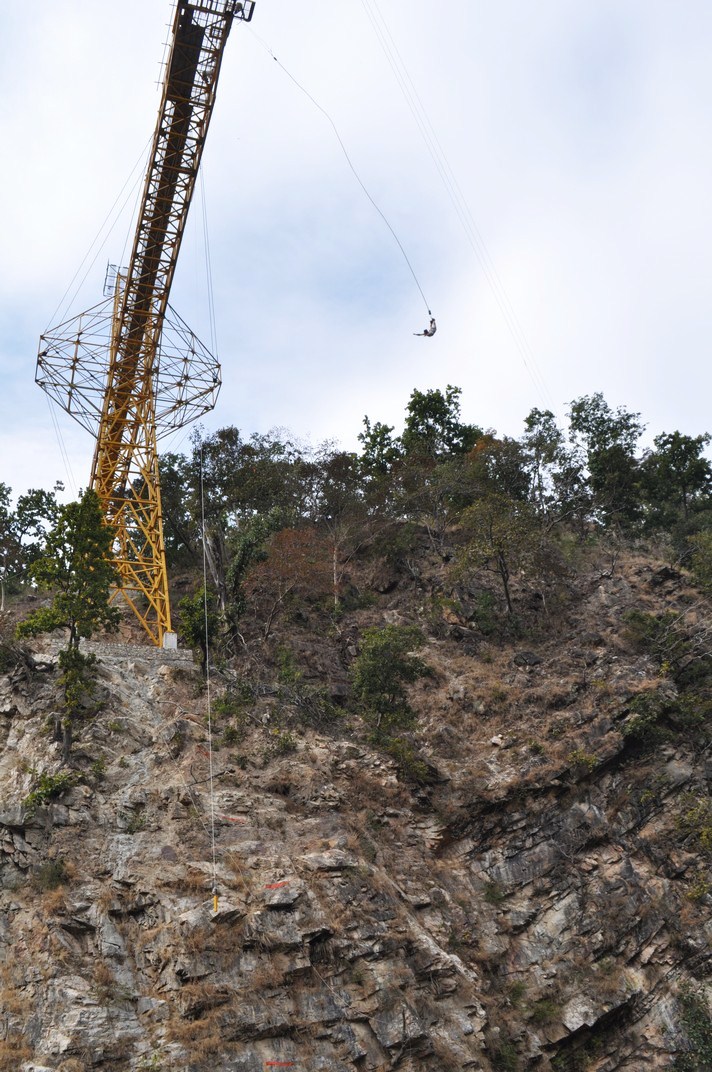 I pulled one off the ledge without a moments hesitation, and knew immediately afterward that I wanted to jump again (for only $25). On my second jump (my 10th jump over all), I decided to go big and pulled a double front flip off the edge into a perfect dive. That move was, I proudly will say, bodacious and beautiful to watch on their mounted video camera at the top. Unfortunately, I have no footage to show you, so you'll have to just believe that it was an amazing moment, and a beautiful motorcycle ride back from the crane. 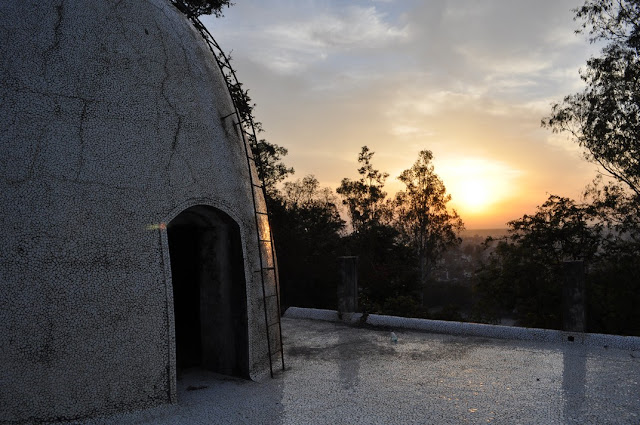 I'll never forget the variety of stimulation that Rishikesh offered the mind, body, and soul. With a breath of fresh air for every step, it was a nice retreat from the chaos of Delhi.
Posted by Colin Peterson at 2:01 PM