“Human beings will continue to deceive and overpower one another. Basically, everyone exists in the very nature of suffering, so to abuse or mistreat each other is futile. The foundation of all spiritual practice is love. That you practice this well is my only request.” -Dalai Lama

Peace, harmony, love. All of these and more emanated from every part of my experience in Mcleodganj. Just a short 5 km from Dharamshala, the hilltop town is the refuge for the Tibetan Government, invaded by the Chinese in 1950 and forced into exile 1959. His Holiness the 14th Dalai Lama escaped in 1959 as well, yet other Buddhist leaders (17th Panchen Lama and Tenzin Delek Rinpoche) are still imprisoned under the hands of the Republic of China.

Victim to brutality, incarceration, and even death, the Tibetan community has gone through extensive lengths to survive this onslaught spawned from the Chinese Government's self-righteousness. Many seek refuge in Dharamshala and Mcleodganj. There are secret transporters that reside near Lhasa, the former capital of the province of Tibet. Here, Tibetans can pay quite a large sum to escape into Nepal. The journey takes an average 34 days, yet some refugees (according to the documentary, "Dangerous Journey: Documenting the Experience of Tibetan Refugees") have taken 201 days. The determination of these people to escape on foot from the evils of the Republic of China is stunning, especially since many of these journeys include time spent in Chinese prison; not a place I would like to be. And this is just to make it to the Nepalese border! Let's not forget that it's over 1000 km from any border crossing in Nepal to Dharamshala.

Mcleodganj has become a central hub for Tibetan Buddhism and the Tibetan Government's operation. One thing I thought I would never experience in my life was an exiled government, and from what I observed, the community is pretty well off. I was only there for three days, so my observation is obviously limited. But from what I gathered, Tibetans are an extremely genuine, honest, respectful, hospitable, and loving group of people that I will never forget. Oh, and they really like Miley Cyrus. I'll get to that point later...

After a 10 hour train to Pathankot (Rs 500 = $11) and a 4 hour bus to Dharamshala (Rs 100 = $ 2.25), Adam and I decided to hike the extra 5 km up to Mcleodganj from the Bus station. We met a Korean man named Ji-won on the bus who decided to join us on our hike. Time and time again, we had to fight off the demands of Taxi services to Mcleodganj, all of which were four times the price of what it cost us to go over 80 km from Pathankot to Dharamshala (what a rip!). We found a nice hotel for very cheap, which had a spectacular view of all of Mcleodganj and, best of all, the majestic Himalayas.

A step outside of our guesthouse room

A Walk On the Himalayas 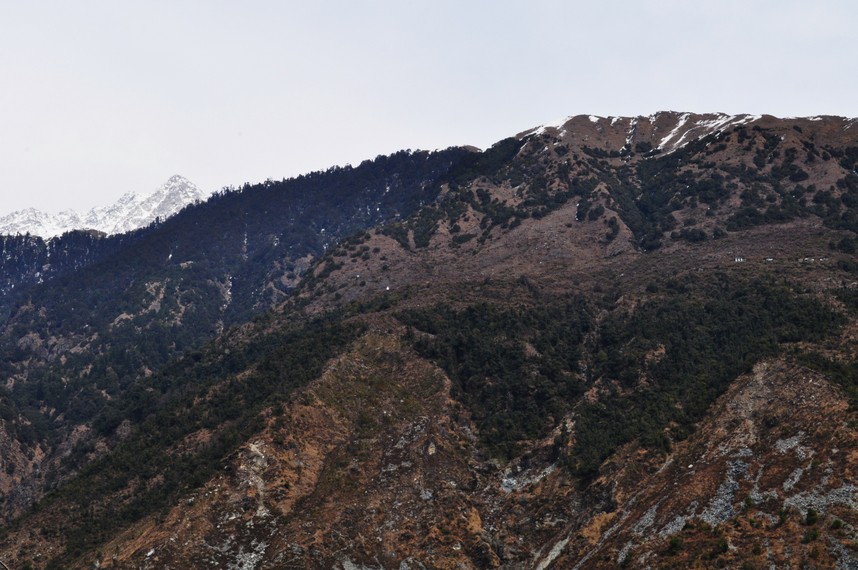 Even standing at the base of this mountain range is enough for me to respect their size and beauty. To think that past these few small hills are some of the tallest mountains in the world was enough to keep me mesmerized for hours. The next day Adam and I decided that we would take our own attempt at a summit just the first hill that you see pictured above. We had no idea what journey we were getting ourselves into. It took us a whole 3 hours to climb only half way up! If you look very closely at the middle of the right edge of the picture above, you can see a few small stone houses. That would end up being our summit.

On our way up to these cottages, we ran across a group of slate miners. They were digging massive pieces of slate straight out of the mountain and chipping them into thin, rectangular pieces to be used for roofs in town. I've never actually seen these manufactured, and seeing these guys mining like so reminded me of some old picture out of the gold rush in California. 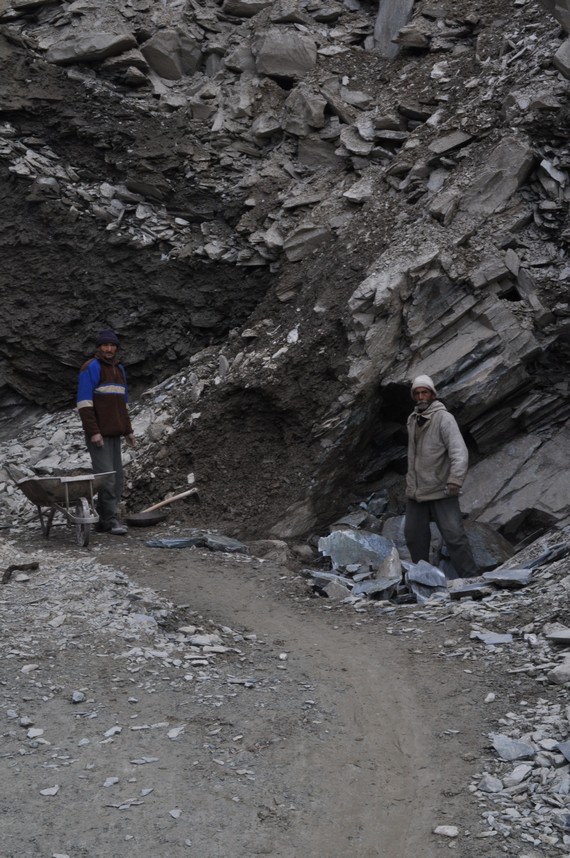 The rest of the hike got difficult. One obstacle involved moving through countless amounts of thorn brush, which poked, scratched, and stabbed us at every angle. Who would have thought that the base of the Himalayas would be completely covered in thorn bushes? It makes the Himalayan mountaineers even more bad ass in my mind. Besides the brush, the air started to get thin, and I knew that every extra 500 feet in elevation would only get more intense. 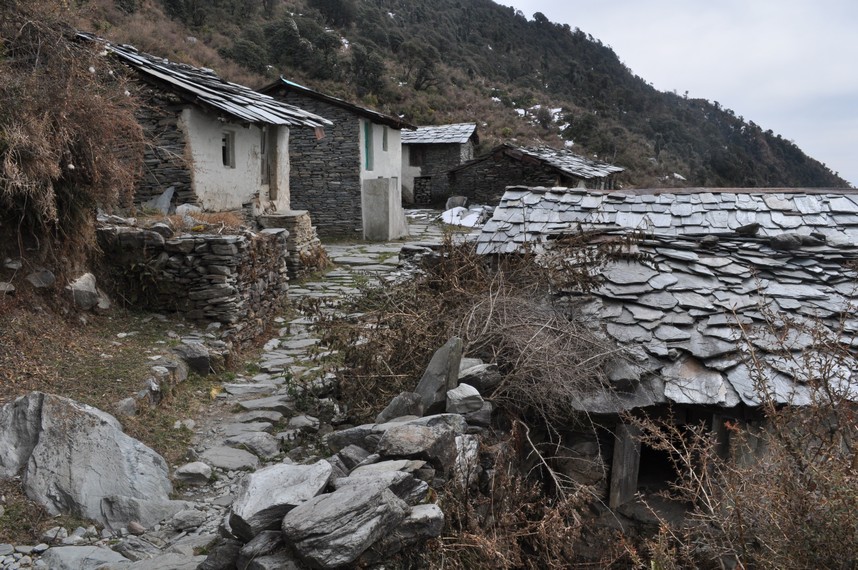 When we arrived at the village, it was completely abandoned. Such an eerie energy was given off of everything there, especially since a good deal of the homes looked like they were in great condition, and were pad locked. A vacation home? A storage unit for mountaineers? I have no idea.

We thought about trying to make it to the top of the hill we were on, but thankfully we decided against it. After reaching Mcleodganj again, we realized how good of an idea that was. Our new perspective at the base of the hill showed that we had only made it halfway. The weather dropped a good 10 degrees and a snowstorm began to blow in later on that evening. Had we gone further, we were absent of warmer gear and food. Not the greatest situation for a barge like that... and a much more developed beard.

The rest of our time around town that day was extremely eventful. Adam, Ji-won, and I had purchased tickets for a music concert to benefit the local theater group, White Tara. I had no idea what we were getting ourselves into! We arrived 20 minutes late to find that the entire theater was packed to the brim. It appeared as if the entire town of Mcleodganj was in one place, all cheering, singing, and applauding to the White Tara Theater. This is where Miley Cyrus comes into my story. Amongst the shower of lasers, lights, and lively audience, a girl came proudly onto the stage lip syncing "Party in the USA." I won't deny, I was impressed. I had not heard the song before and realized through Ji-won that it was Miley Cyrus. I couldn't believe that of all the possible American songs, someone would pick Miley Cyrus. You know who could believe it? The Tibetans. Countless more pushed and shoved their way in as best they could just to watch this piece of the show. After watching the music video when I returned home, I totally understand why the Tibetans erupted in appraisal. This girl, in the White Tara Theatre, totally owned Miley Cyrus with her shower of lasers, an incredible sound system, and best of all, the entire community of Mcleodganj.

What's even better about this is that we had a whole two more hours of entertainment to go. The theater had choreographed dancing (they imitated the JabbaWockeeZ group from "America's Best Dance Crew")  live music, more lip syncs, traditional Tibetan song and dance, Tibetan hip-hop, and even Tibetan comedy! I've never seen a crowd so passionately enthralled and humored.  Unfortunately, I have no pictures, sound, or video from this night. All I can say is, if you ever go to Mcleodganj, go to the White Tara performances. They are seriously stoked on their acts, and very good at what they do.

I By the time I left, I had eaten at 7 different restaurants. I tried all the Tibetan plates that were available, and my consensus is: scrump-didly-licious-snip-snap-snappa! All along each of the small streets of Mcleodganj, one can find a family owned Tibetan restaurant with several choices of Momos (*extreme salivation, commencing*). Tingmo, Thenthuk (handmade noodles in soup or fried), and best of all steamed brown bread. 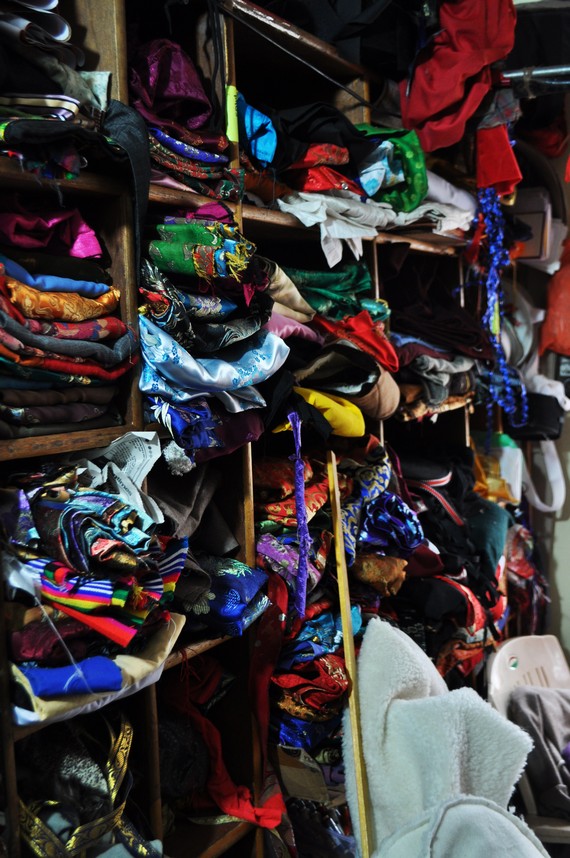 One of my favorite experiences in Mcleodganj was getting a tailor made jacket. This jacket is by far the most bad ass piece of clothing I have purchased. Completely covered in goat fur inside, and layered with a shiny dark blue/purple exterior. Ballin! 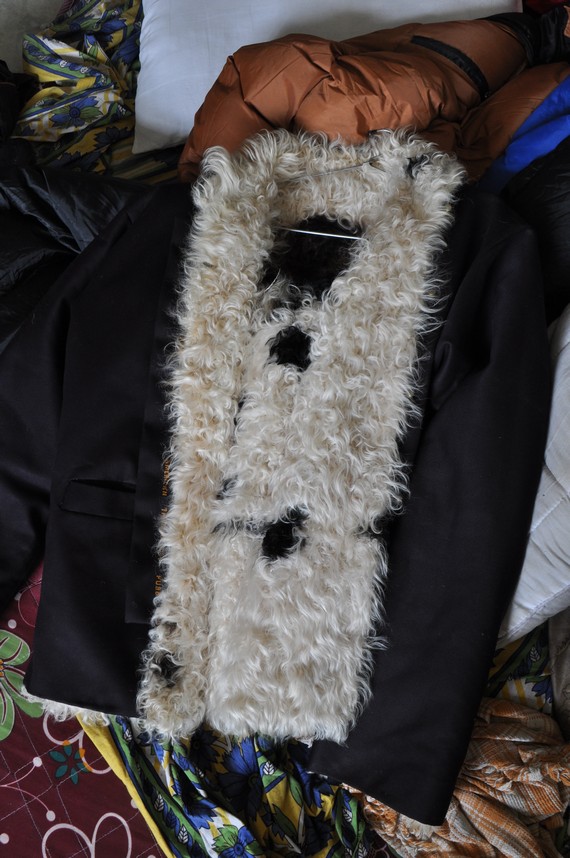 What made it all the more amazing was purchasing the jacket from a wonderful Tibetan family, who had handwoven the entire thing for some lucky person that would have $88 to buy it. 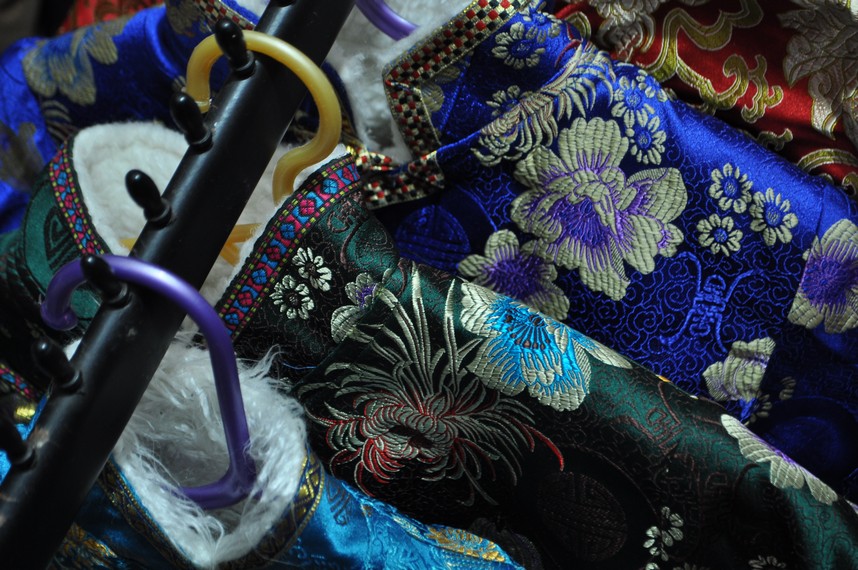 Dal Lake was a short hike from Mcleodganj, so Adam, Ji-won, and I awoke early in the morning to get a head start on the day and visit this sacred lake. On the way out of town, these dogs started to follow us. I couldn't believe how far they followed our path!


We had no idea why it was this way, and upon asking a few Indian guys with auto rickshaws right next to it, no explanation was found. Sometimes, when you're looking for an explanation for something in India, and it never comes, it just is what it is and that's all there is to it. 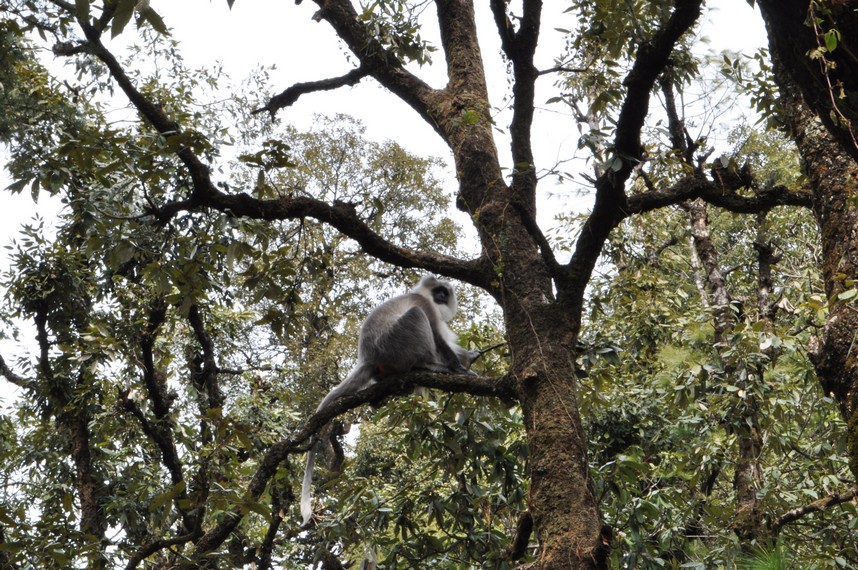 On the way back, we crossed paths with an amazing animal that I have never seen before. The Gray Langur Monkey is a peaceful, majestic ape that moved with elegance across the trees. Here's a quick video of it that I caught! Its not the best quality but you should be able to spot him a couple times.

There are many other monkeys running, swinging and leaping around in the forest near Mcleodganj, as well as adjacent to your food, so you have to be on your toes and ready to scare them away when they try to grab your stuff!


The Dalai Lama and the Tibetan Government have organized an amazing place for the Tibetan refugees and community to reside peacefully while so far away from their unfortunate, oppressed relatives. I would recommend going there in a heartbeat, and hope that you get to experience the beauty of Tibetan people, culture, and community one day yourself. 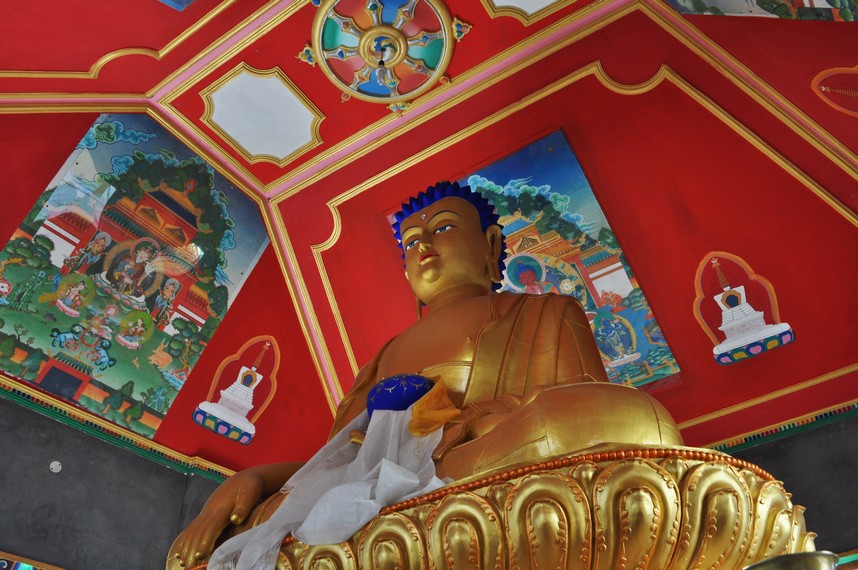 Posted by Colin Peterson at 9:59 PM