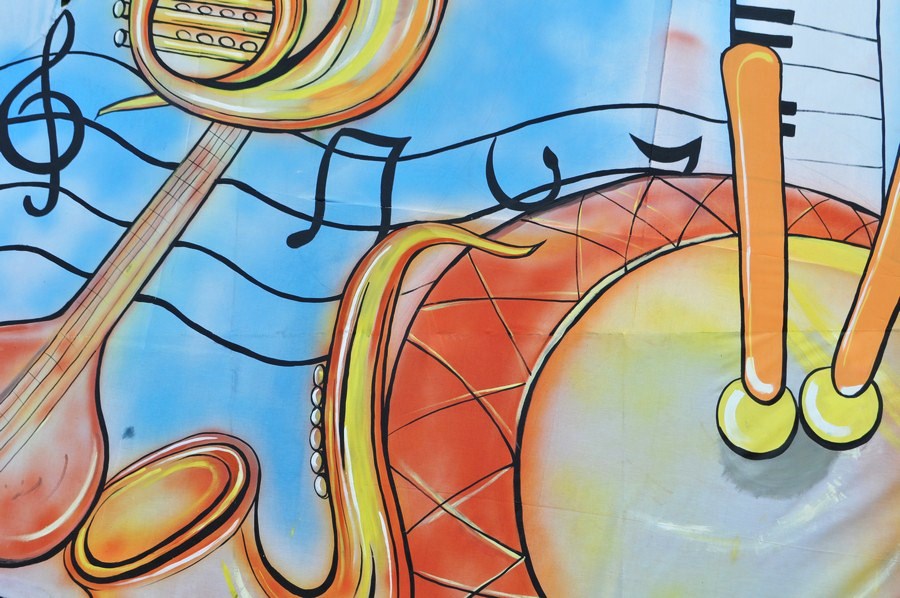 "You are invited to the festival of this world and your life is blessed" - Rabindranath Tagore
12 Salopards - Bankalé by gregzinho
Millions of people, all raging for 4 days straight as hard as they can, worldwide. So is Carnival. Combining London's 100,000, New Orleans' 250,000, Brazil's 500,000, and Haiti's 1,000,000 person attendance, one could say that it is the single biggest party in the world. 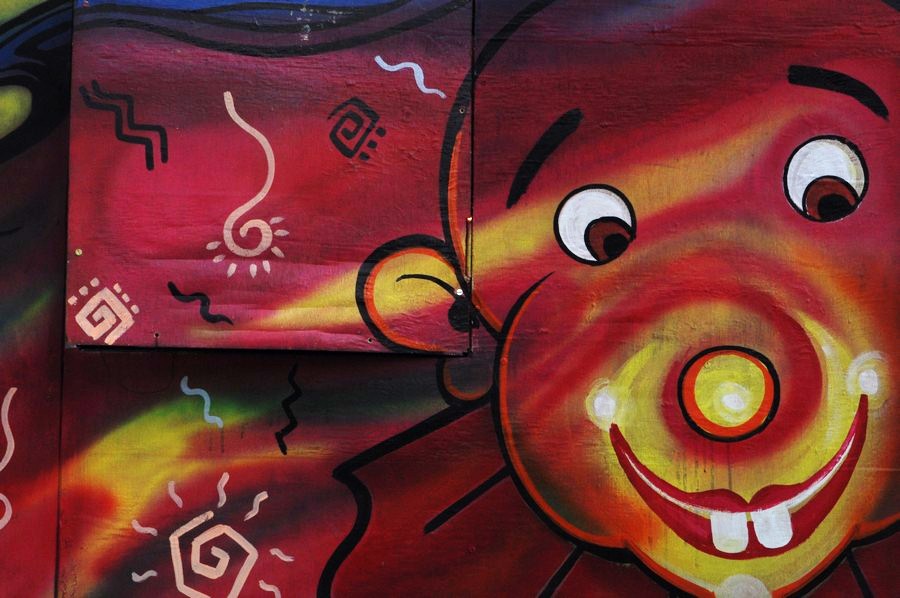 Carnival's roots go back to Christianity and Catholicism primarily. It is a celebration immediately preceding Lent. Lent, in a historical sense, relates to the 40 days wherein Jesus fasted before his public ministry. He faced consistent temptation from Satan throughout this time, but pursued to begin a ministry that is recognized as the first coming of Jesus. Lent, in its modern sense, is a sacrifice of something in a Christian or Catholic believer's lifestyle (eating meat, drinking beer, eating candy, watching television) or a complete fast that lasts for 40 days. The sacrifice of choice or fast ends on Easter, wherein families around the world congregate for righteous, religious feast of champions. 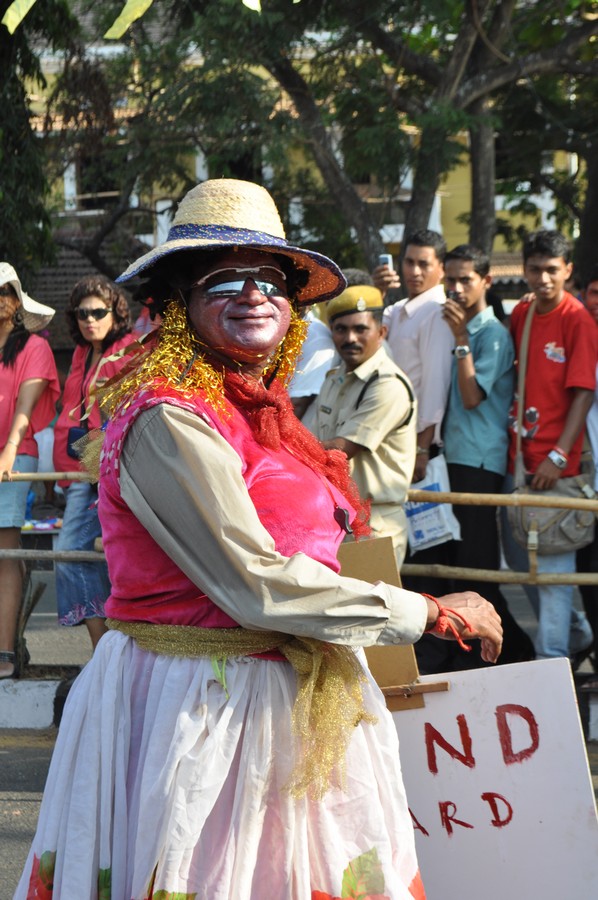 So on that note, if someone is about to telivision, candy, beer, meat or food in general, they damn well should party as hard as they can for 4 days before hand! 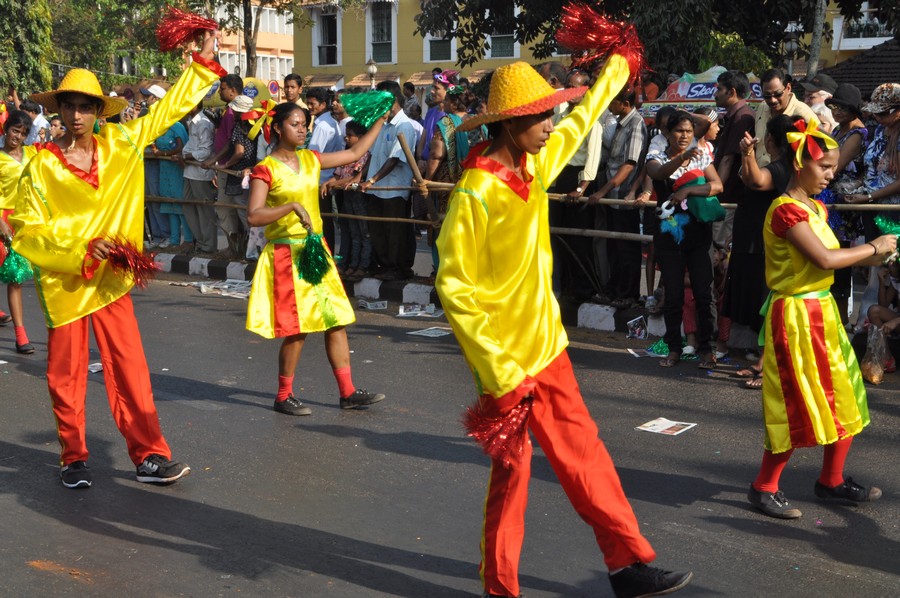 When I first made plans to visit Goa a month ago, I had no idea that this crazy festival would fall on the moment of my arrival. After learning about Carnival only a day before my departure from Delhi, my plans completely shifted to partake in the festivities. As soon as I exited Goa's airport, I caught a public bus straight to downtown Panajim, Goa's capital. I arrived just in time to observe what would be longest, most musically diverse parade I have ever seen. 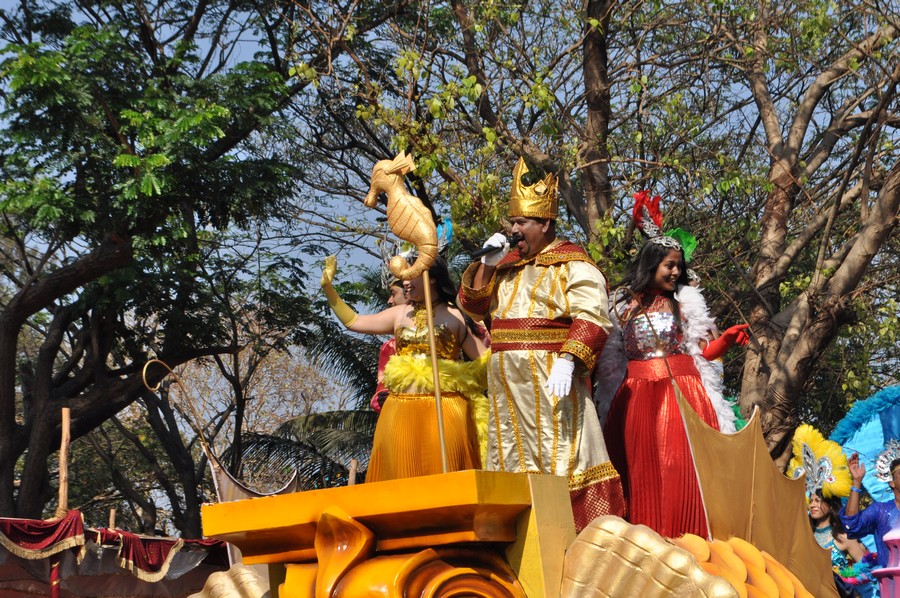 It all started with the King's Float, a famous attraction to the tourist crowd. Atop this massive moving truck that is lavishly adorned with sparkling studs and effaced with a golden mask stands "King Momo." He is the ruler of the entire carnival festival, officially making him the single coolest person on the entire parade line. And with 4 beautiful women on either side of him, dressed to impress with multicolored saris, how could anyone disagree? King Momo glided elegantly by with his beautiful lady friends, and the carnival parade officially began. 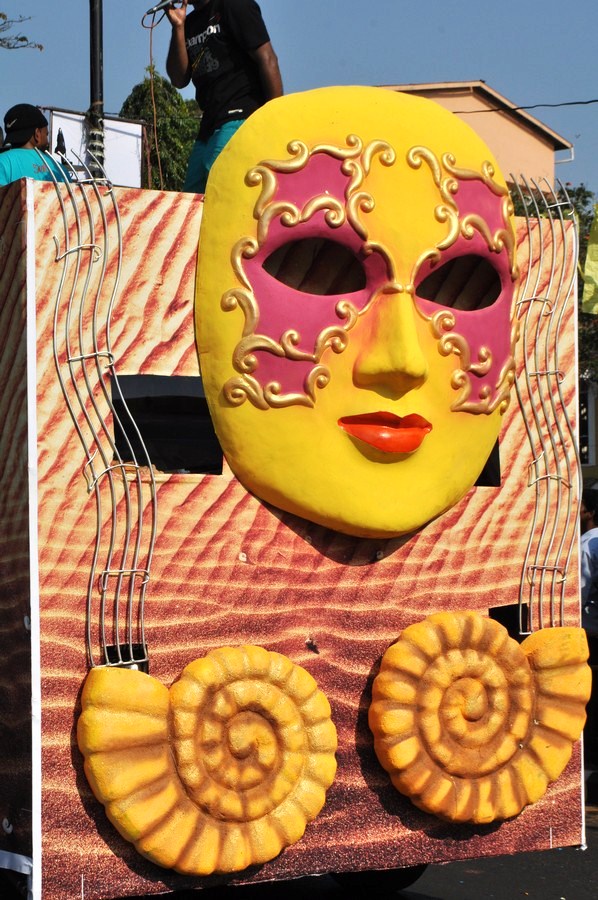 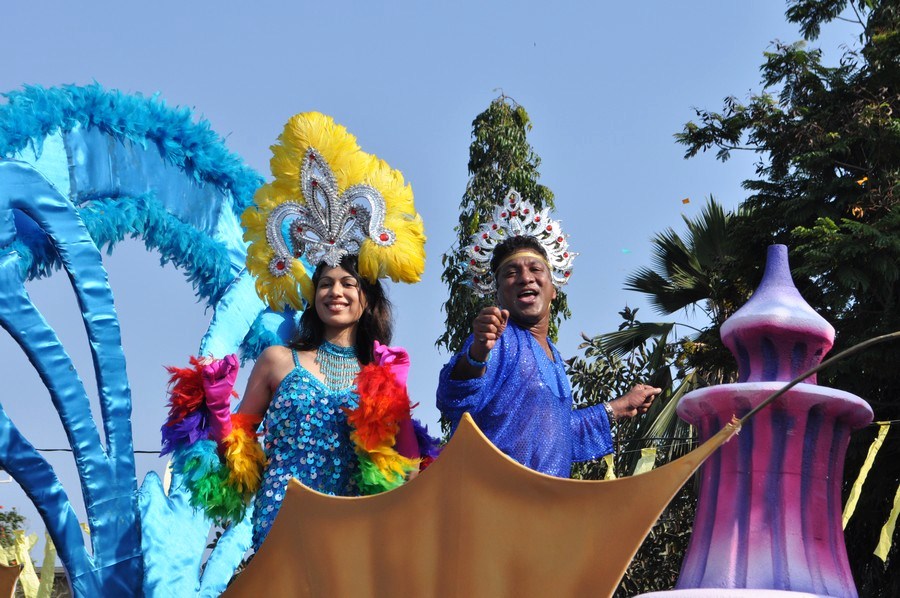 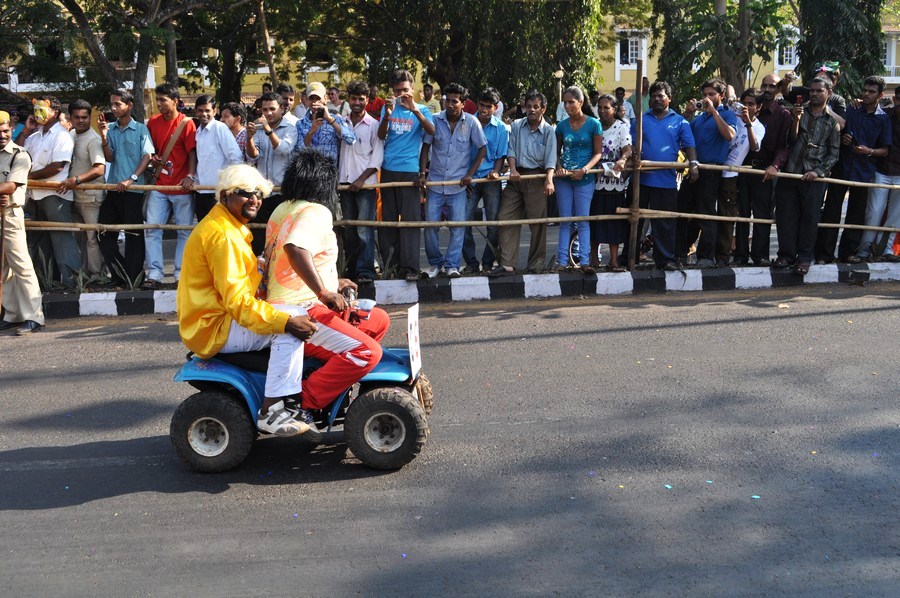 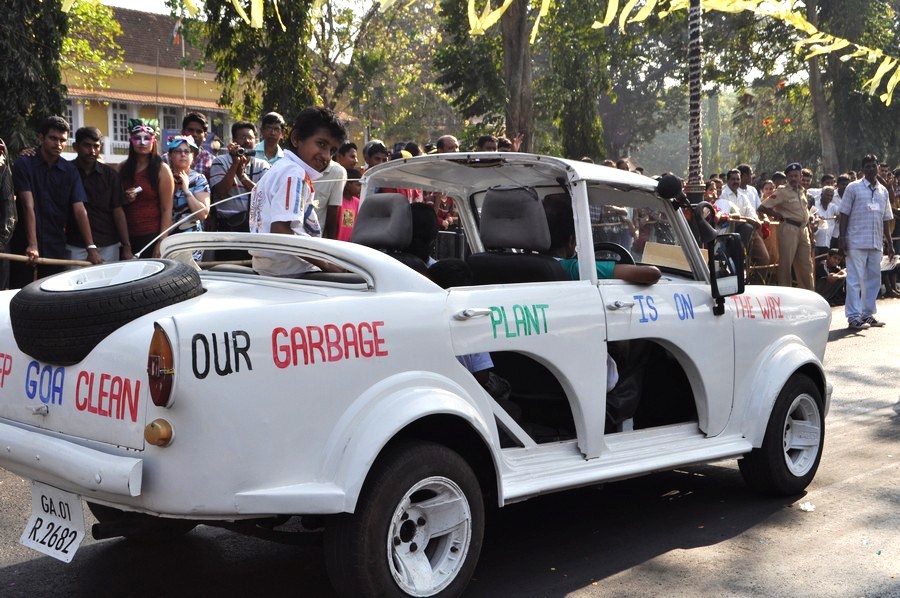 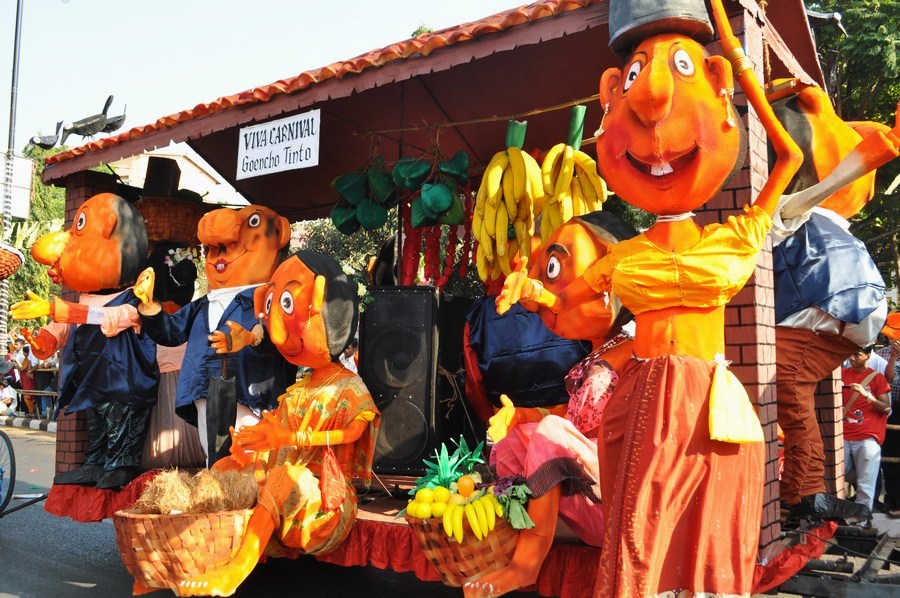 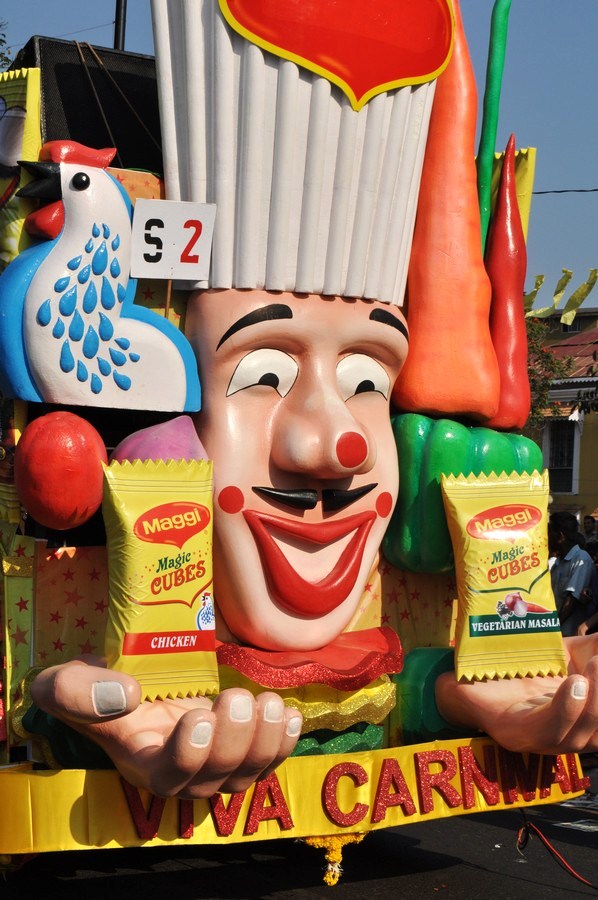 Little did I know that this parade would run for 3 straight hours! And never once did it get redundant. One massive moving truck after another completely enshrouded in decoration moved along the eagerly waiting crowd. The logic and planning behind these float designs were hilarious. Some had simply plastered a massive piece of wood or cardboard to the front, painted it to their liking, and completely disregarded cutting holes for the drivers to see where they were going. Instead, they found it logical to have a man standing outside the driver's door, telling him when to stop and go. Not such a great idea when the massive truck in front of you is bearing a stack of speakers, piling ten feet high, with a small generator trailing it in a pushcart. 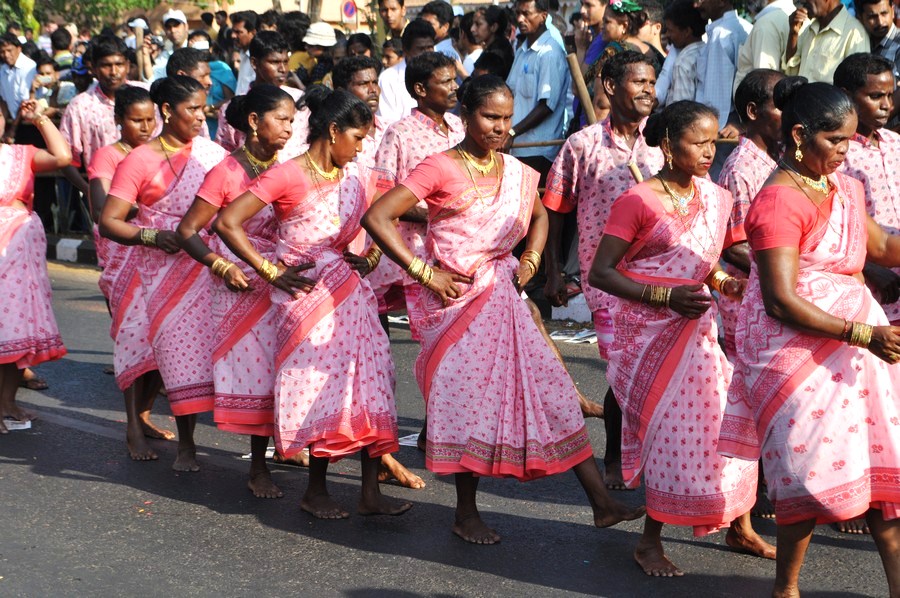 From electronic varieties (psychedelic/goa trance, drum and bass, house, 90's techno, dubstep) to live performances by trumpeters, cumbria bands, 80's rock group impersonators, and other traditional Portuguese-flavored Indian rhythm, Goa's Carnival took all the groups of a multicultural music festival, put it on massive floats, and charged it down the main street of Panajim for a 3 hour-musical extravaganza. Dozens of uniformed dance groups followed each float, and had choreographed moves with a strong spice of Bollywood flavor.

Just when I thought things were at their peak, the paint began. Little did I know that Goa's version of Holi is celebrated on the same 4 days. With my camera in hand, I ducked low and elusively found an exit point from the crowd. A reunion with Anya, Bert, Nick, Matt, and Jilly was anything but colorless, as the group of 5 ended up in the middle of the crossfire. I waited a good while, hopping up and down to see if I could spot them in the thick of the chaos. Slowly, they emerged. Anya had been completely smeared across her face in red ; Bert, Nick, Matt, and Jilly were respectively purpled. It wouldn't be long until I joined them in a wash of powdered paint. Anya threw a huge chunk right in my face, and I surrendered to the painting of my entire face.

After retreating from the rainbow battle royale, we stopped for a beer to immerse ourselves in the festivities even more. This would be the beginning of one of the few nights in India where I partied to pure belligerence, in the company of Indians and foreigners of all types... but especially Russians.
Goa's biggest population of tourists are indeed the Russians. Though I never fully discovered why, I guessed that it had everything to do with a package vacation. I was fully immersed in Russian shopping and celebration once I reached the Anjuna Night Bazaar in North Goa. What package tourist could ask for more when they have an international buffet, absurdly overpriced souvenirs, electronic/live music, and an endless supply of beer? Everything was packed into one at the night bazaar, where Nick, Matt and I got deep in the partying scene of Goa and stumbled back together to pass out in a hotel near Anjuna Beach, far from our intended destination in Navelim.
The initial plan for Anya, Bert, and the 907 Mukherjee Nagar house was to stay in Navelim, a small town just south of Panajim about an hour away from Margao. However, our first night of fun left us scattered across the province of Goa, and it was not until the next morning that we all congregated at "Primos Donna," the vacation home of Josinho Fernandez. From the outside, it looks completely abandoned, and though aesthetically discouraging on its cover, the interior turned out to be very well kept with 3 large bedrooms and living room suitable to sleep 9. Regardless of our number, this home would come to be a base point for several journeys I took to the beaches due east and far south.


Early the next morning, a good friend of mine from high school gave me a ring. Dennis had arrived from Kyrgyzstan for a large meeting between the Fullbright Scholars of Asia. He had plenty of time to spare before his own presentation on his research on Kyrgyz golden eagle hunting culture (please watch the video below before going any farther in this post. Then I highly suggest you read more at www.keenonkyrgyzstan.com later on!) , so off we went on a small scooter as far south possible in Goa.

Look At All The Smiling Faces by Moodgadget
We finished our ride at Panajim beach, hoping that upon arrival, white deserted sands would meet clear blue waters for miles in each direction. Paradise was far from our expectations, but all the same very suitable and full of other adventurous antics for Dennis and I. 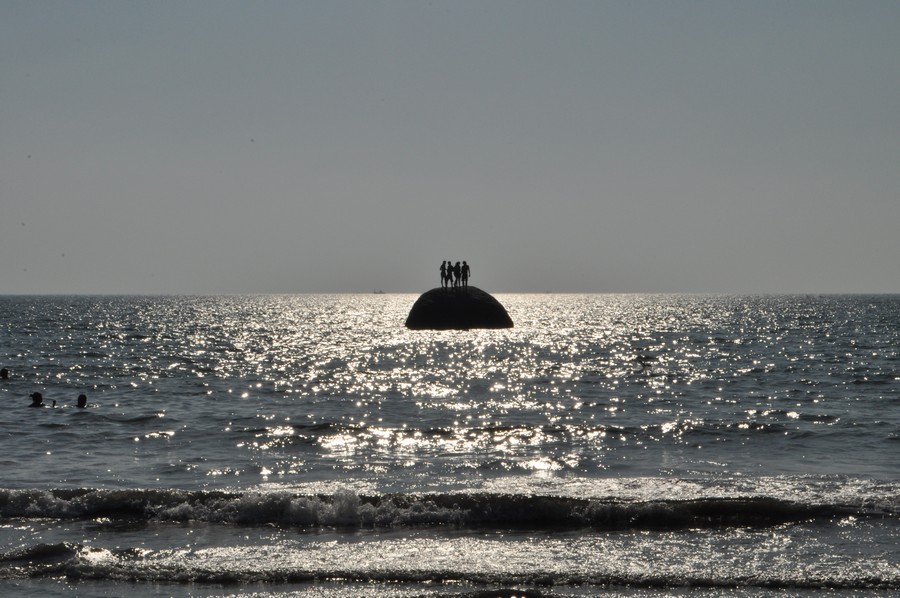 We swam out to a large rock not too far from the shore and sat to gaze upon a beach infested with the traditional beach tourist scene; an older man slowly scaled the shoreline in breaststroke and snorkle; women far too old for tanning sagged their skin ever farther in the heat of the afternoon sun. All of them seemed to be searching for that postcard moment; a walk out to a sugar coated shore; a massive infinity swimming pool to dip in instead of the ocean; coconut trees, bending loosely in the blow of a gentle coastal breeze, providing one and all with sweet exotic refreshment; and maybe even isolation, peace, and harmony with nature; everything realistic about paradise these days. I, for one, sought some of these. Its a shame to see what I and others have contributed to a place once pristine, even for how much of an exhilarating feeling "paradise" can give. But there I was, soaking up the warm sun and ocean water of perfect temperature. All the same, it was a relaxing, rejuvenating day and a safe 100 km drive there and back.

Few times in my life will I find the chance to reunite with friends becoming so swiftly distant with the end of my college career. Through those glorious years of growth and enlightenment, I always hoped a chance would come when we could all experience a journey to a special place; a peculiar, magnificent side of the world. That day has come, and those who were willing to go that distance are forever embedded in a memory of infinite freedom. Thanks to Bert, Anya and Dennis, these ideas that were once dreams came true.