"Today I watched about a million Christs in the form of Sikhs being killed, slaughtered and charred to death. I was shocked as well as comforted by the fact that there were no traces of fear and violence in their sacrifices. They were sacrificing their lives happily following the path showed by their Gurus." - Charles Freer Andrews

On October 13, 1920, C. F. Andrews, a Christian of the English Church and dubbed "Christ's Faithful Apostle" by Mohandas Ghandi, witnessed a horrific yet powerful moment in India's struggle for independence. Andrews was visiting the Sikhs, a religious sect from the Punjab region. The Sikhs warmly welcomed the presence of a Christian man. Andrews thoroughly enjoyed their hospitality, reminding him time and time again of his own beloved savior. At the time, the Sikhs and their Gujuwaras (their sacred temples of worship) were sadly trapped in the vice of the British Empire. This included Nankana Sahib, a Gujuwara where countless piles of firewood were stored for cooking massive meals at the most sacred Gujuwara of them all, Harmandir Sahib. When the Brittish refused access to this sacred resource, Sikhs began to gather in large numbers at Nankana Sahib, completely unarmed. After a few days of peaceful protesting, which involved nothing but a refusal to leave Nankana Sahib, the British attacked. It was not just a hail of bullets that came down upon the Sikhs, but also a brutal beating, stabbing, and mutilation with sticks, bayonets, and swords. At the end, when the unscathed Sikhs were sought, only one man in the heap of bodies was moving. The British nailed him to a piece of wood and burned him alive. When Andrews said Christs, he meant it in more ways than one.

The heartless killings did not end at Nankana Sahib. After taking hundreds of Sikhs prisoner, the British loaded them onto a train to be relocated. A community of Sikhs down the rail line recieved word of this, and simply begged the British to stop their train, on the Sikh's expense, so that the prisoners could be fed. The British refused. Upon recieving this refusal message, Sikhs lined up in the middle of the train tracks, peacefully waiting for the British to stop their train. The train did not stop. Two Sikhs were crushed before the Conductor demanded that the train be stopped.

The Nankana Sahib Massacre and the following atrocities on the railroad came a short one and a half years after the Jallianwalla Bagh Massacre, yet another malevolent move by the British Empire. Jullianwalla Bagh is a garden just a few blocks from Harmandir Sahib. Here, on April 13, 1919, the British opened fire on thousands of peaceful protesting Hindus, Muslims, and Sikhs. Over 1,650 rounds were shot, and the only exit from this park was on the other side of the firing line (or into the black abyss of what is now named "Martyr's Well"). Visiting this site today, one can still see the bullet holes (as well as the nail marks) that scar the perimeter where innocent lives were wasted by British arms.

Even after the Brits had granted Independence for India, they did so on the accord that the Sikhs would assist them in World War II. Over 90,000 Sikhs sacrificed their lives for the same country that had heartlessly murdered thousands of their people.

I apologize for starting this blog so gravely, but it shocked me as to how little I knew about the Sikhs and their involvement in the nonviolence movements of India's revolution. There is no doubt in my mind that Mohandas Ghandi was one of the greatest influences upon the nonviolent struggles. But if one looks back through history, the struggle of the Sikhs as a people is far beyond the pain and suffering of that single man. When Ghandi was still in South Africa, the Sikhs were already dying in their peaceful fight for freedom.

I won't digress any farther on this matter. I'll leave that to potential research papers that I may implement towards my Sociology courses here at Delhi University. What I will do, however, is show just how wonderfully pleasant and heartwarming these people were to me as I visited their most holy landmark, the Golden Temple of Amritsar.

When we walked through the massive gates of Darbar Sahib, I was dumbstruck at the incredibly pristine complex. The Golden Temple sits in the center of a beautiful Pool of Immortal Nectar, fed by the sacred water of the Ganges River. People of all sizes, ages, religion and ethnicity wander in a clockwise circle around this pool. Every once in a while, a Sikh will strip to his underwear to bathe in the nectar, which is said to rid one of disease, sins and all other maladies. Bhangra (the music listed above), a traditional form of singing, perfectly emanates out of hundreds of Bose speakers across the gold and white marble. Upon reaching the bridge to the temple itself, I gazed through the gate to see hundreds of dastar (Sikh turbans) patiently waiting. All of them hold karah parshad, a holy meal that is offered as a blessing. Yet, as soon as one exits Darbar Sahib, another equal portion of karah parshad is offered in return from those working at Darbar Sahib. It is yet another symbol of unity, equality, and respect that the Sikhs wish to show all.


When we finished our own karah parshad, the sun began to set and we needed a place to say. The Sikhs could not have been more accommodating. There was a hotel right across the street from the Darbar Sahib complex that allowed any traveler to stay free of charge for up to three days. The Sikh's generosity didn't end there.


Just across from our hotel in the Darbar Sahib complex was the Guru Ka Langar: The Community Kitchen. This two story building can hold hundreds of people in massive lines. Each person is given a plate, bowl, and spoon. Servers walk down the rows with massive pots of daal, rice, and roti. All are served until you are completely stuffed and need to refuse their endless offering. After stuffing yourself full of delicious vegetarian food, there is a massive chai dispenser outside to layer the meal in sweet, spicy goodness. It is believed by the Sikhs that no person should enter their complex without being well fed. They ensure this happens for each and every person by leaving the kitchen open 24 hours a day, 7 days a week.

The Sikhs left one of the best impressions on me of any religion I have ever experienced. It really set a good tone for the rest of my time in and around Amritsar, which, I assure you, was more wild and crazy than I could have ever expected. 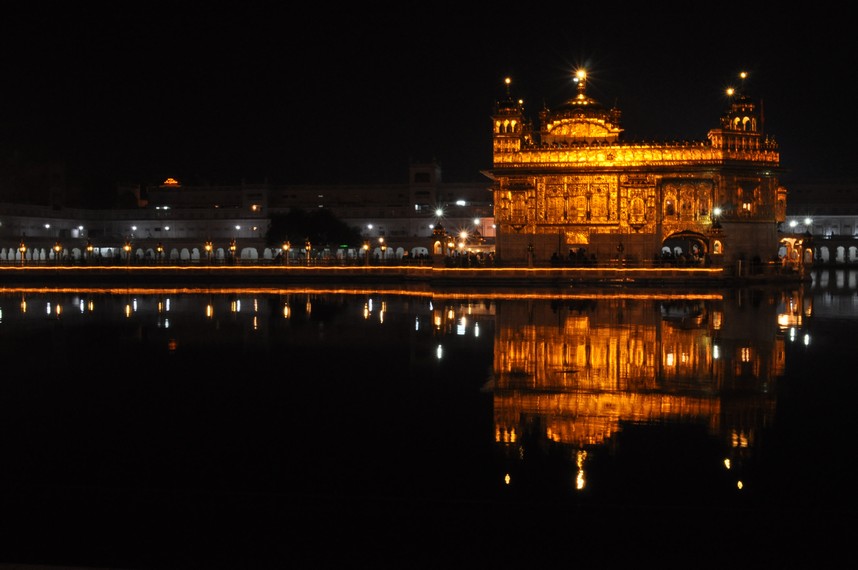 Attari - The Changing of the Guards 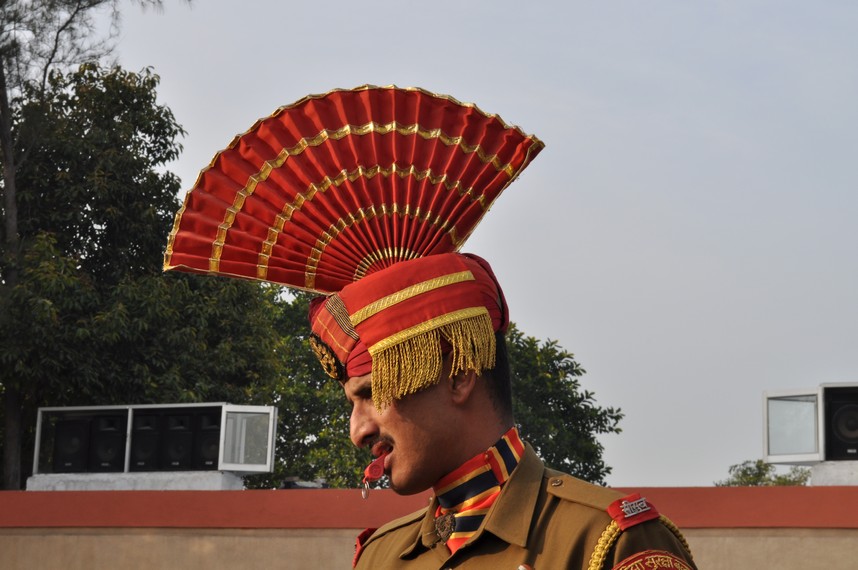 Just a short hours drive from Amritsar was the Pakistan/India border, where a small town named Attari hosts a ceremony that reminded me of a dance show I would see on television. Here, at 4:30PM, hundreds of Indians gather in mass to dance and cheer for their country. And all for the changing of the guards at the Attari border! 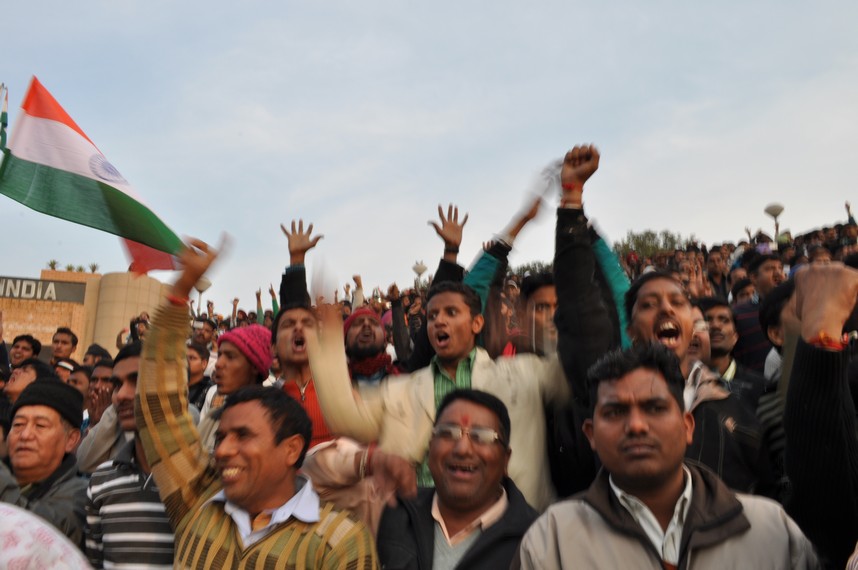 The ceremony started with a half hour of Bollywood music. Awesome. All the Indians around me were completely stoked on Adam, Azzar, Jilly and I for simply being there with them, dancing to famous Bollywood tunes. 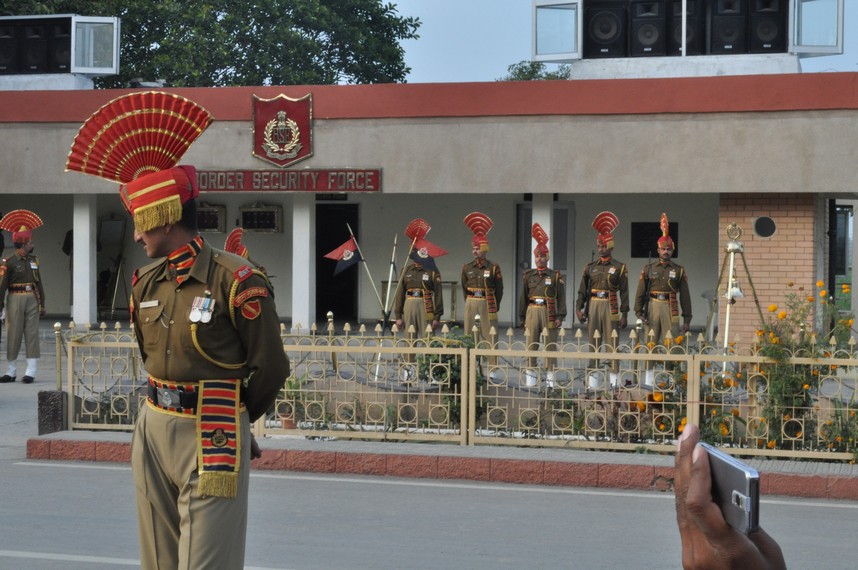 The music ended abruptly at one point and a guard stepped forward. He took a deep breath, and screamed into the microphone. You know those announcers on soccer games from Latin America? Imagine them saying "goooool!" except an extra 20 seconds longer. This guy stood there, purple in the face, for what seemed like half a minute. Immediately afterward, the entire crowd around me erupts, cheering and celebrating their guard's valiant cry. Out of the guardhouse came and Indian man in an all white jumpsuit, with a massive India flag and "India" stamped on the back of his jacket. He was carrying a microphone, and started screaming "HINDUSTAN!" after which the entire crowd erupted in a cry of the most passionate nationalism I have ever seen.

Out came the guards, marching perfectly in unison, all the way to the gate. Their feet looked as if they were floating over the ground, and their hands swung back and forth, perfectly straight as if someone had stuck a massive key in their backs and wound them up and sent them loose like toy soldiers towards the border. They reached the border, turned on a dime, swung their legs high into the air, and finished the march by slamming their boots hard into the ground. One guard marched to the border, and simultaneously a Pakistani guard met him. They turned on a time again, flung their feet in the air, and slammed them on the ground. The flags of both sides of the gates were lowered, and the gates were closed. 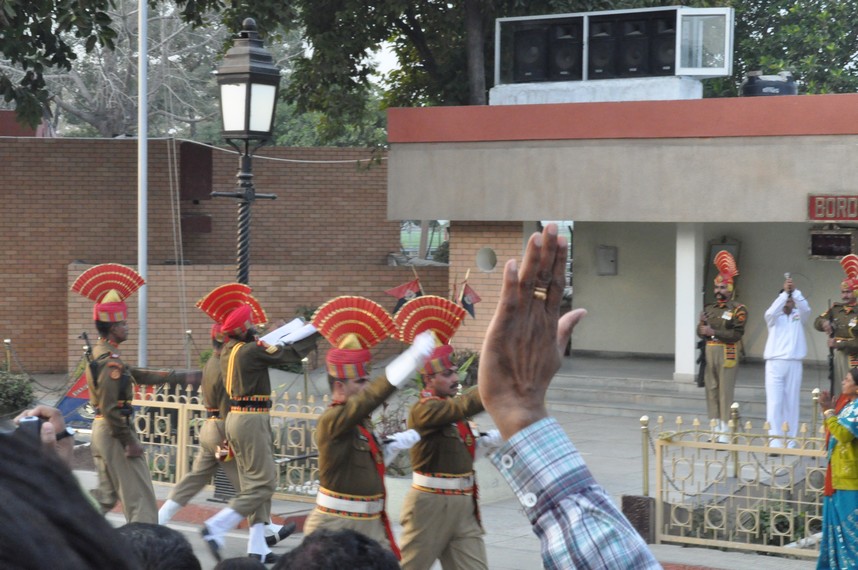 The entire procession blew my mind. I am very glad I went the distance to see something so profound.

Amritsar itself has some incredible sites that I thoroughly enjoyed seeing. One temple in particular, Mata Temple, was a childhood paradise. Imagine the coolest McDonalds Playplace you've ever seen modified to be a sacred site for Hindus. This was Mata Temple.

It took me over an hour to get through the labyrinth of Mata Temple. Every wall was covered in either colored mirrors, paintings, or sculptures of the many Hindu gods. What a great way to spend the last day in Amritsar.

We specifically walked through Amritsar to get to these and other landmarks, and on the way I experienced a great deal of friendly interactions with the Punjabi people. It's sad to think that such a horrendous lifestyle once existed under the British Empire. 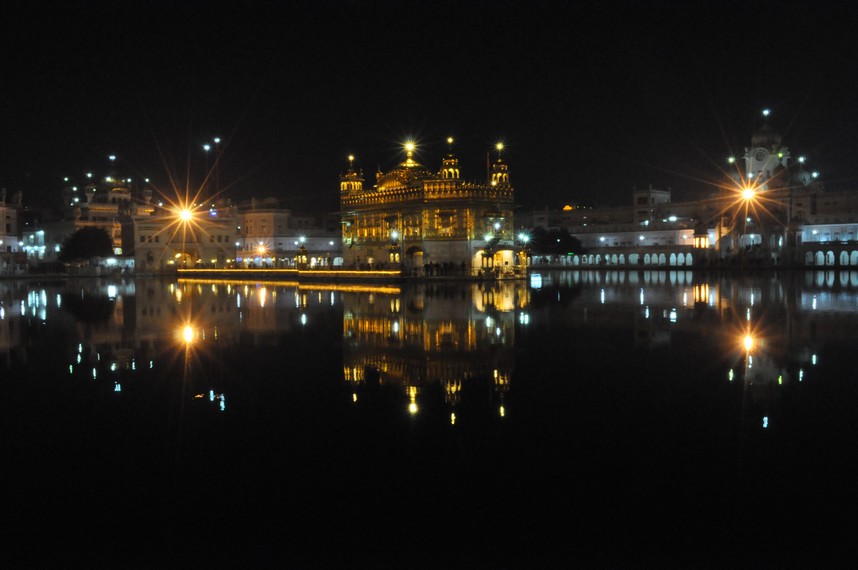 Posted by Colin Peterson at 5:20 AM