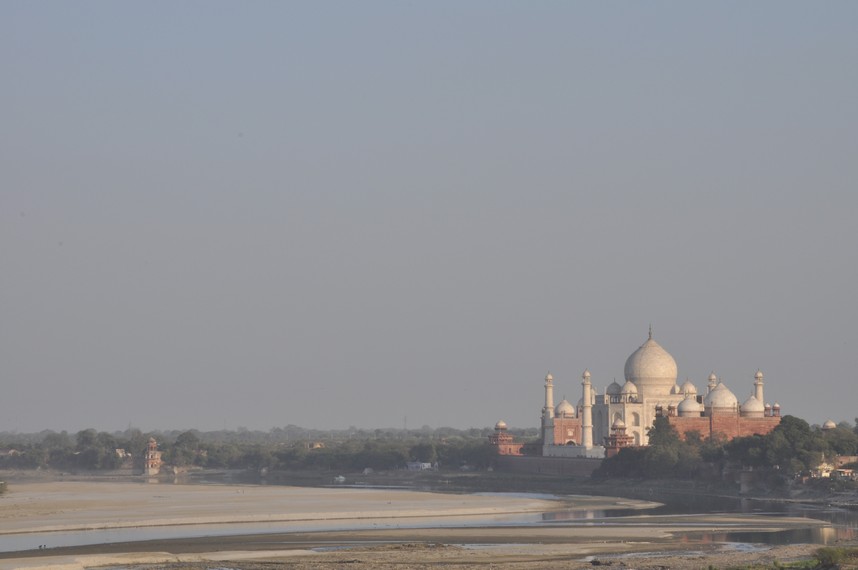 
"Did you ever build a castle in the Air? Here is one, brought down to earth and fixed for the wonder of ages". - Bayard Taylor

Taylor visited Agra in 1853, a short 5 years before India fell under the British Raj. An earthquake of  events were imminent. The Indian Rebellion would result in a mass slaughter of Indian, Mogul, and Sepoy populations, yet Taylor experienced the calm before the storm. In days of modern tourism, I sought a similar moment of peace when visiting Agra. This city is among the most frequently visited destinations in the entire world. Millions pile in each year, pushing and shoving for their very own postcard picture with the magnificent Taj Mahal. I only hoped that I would beat the chaos of a tourist invasion that, according to rumor, will sometimes reach a shoulder-to-shoulder concentration.

There was inevitably a line to simply enter the outer courtyard, though I only waited behind a couple dozen. With but a minor delay, I strolled through the entry gate. As I entered, I calmed to take each step in careful measure, in movement proportionate to the countless hours of calculation done to perfect everything from the surrounding courtyards to the mausoleum itself. People rushed past, ignoring the delicate flower arrangements and fresh green grass of the southern courtyard, dismissing the endless detail of dark red hand carved design upon the surrounding walls of the Taj. The main entry way grew larger on my right, slowly revealing a paradise within. The western minarets came into view, and soon enough, the picture perfect image was filled upon the southern arch.

Seeing the Taj was a speechless moment, as its magnificence finally surfaced to reality after viewing it in history books, advertisements, postcards, and all other ways this modern wonder of the world has been pictured. People were rummaging for their cameras, stuffing themselves all over the edge of this platform that I stood on in the picture above. It was only for about 10 seconds that I could get this photo before another wave of people shuffled and stumbled to the very edge for their own self portrait in front of the courtyard and mausoleum.

I spent a long time walking past the fountains. Azzar explained to me that part of the influence for the Taj's design was the Islamic image of heaven, wherein fountains of honey would sprout in countless rows. Upon reaching the base of the white marble, I truly understood the size of this colossal marble structure. It is massive, and so perfect in symmetry, etchings, and precious stone encrusting. On the left side of the mausoleum is a mosque that was built when the Taj was being constructed by the 20,000 workers. 22 years of worship and labor passed. When completed, there was a second building constructed on the opposite side of the Taj to keep the complete symmetry.

It was very surprising to see such a crowd of foreigners. Being in Delhi, I almost never see tourists strolling through Mukherjee Nagar, the area where my apartment is located. Even in the rest of the city, I'll only see someone every once in a while. Such a change swiftly brought me away from my place as a student, and I haven't felt that yet since my arrival to India. It's always surprising when that feeling comes around here. I'm sure it will occur again when I see Varanasi or some of the southern provinces and cities (Karala, Goa, or Mumbai). What was worse were the street vendors. They stuffed everything they could up against the windows of the bus, and upon taking one step out of the door, I had bracelets, t-shirts, mini-Taj Mahals, and camera memory cards stuffed in my face: "100 rupee shirt! Taj Mahal look you see only 200 rupee! 300 rupee good price for you please sir good price for you!" Wow, do I hate when that happens.

We left the Taj after everyone had set out to search for Azzar and I. We had, in fact, been taking a bit too much time and the rest of the group was waiting to head off to Agra Fort or searching for us. I looked back one more time at this amazing feat of stonework. Taylor's words ring true in my mind. It really looks like it came from a higher place. 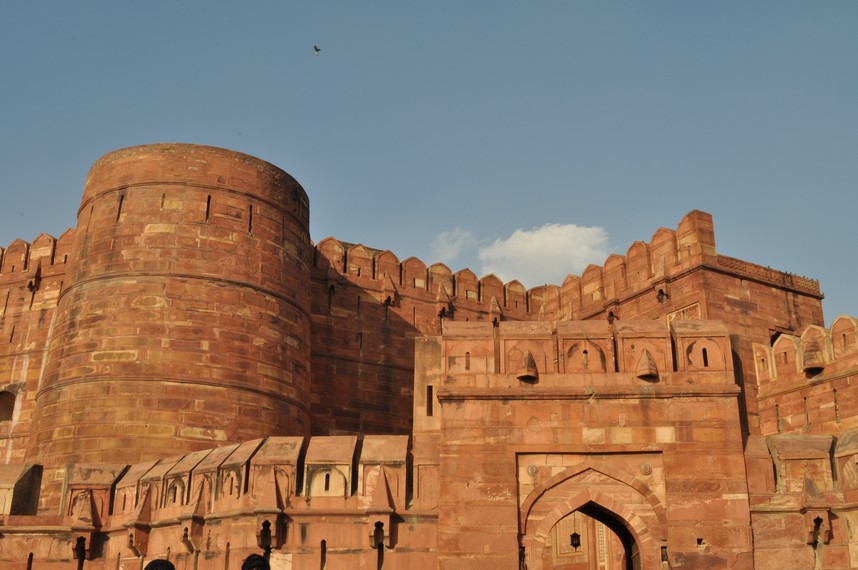 Agra fort was another incredible site, full of monkeys... I mean tourists... of every shape and size. It was interesting to hear the heroic story of Shivaji's escape from this fort. The guy was called upon to stand in front of the court, and when the treasurer personally insulted him in front of everyone, Shivaji cut the treasurer's head off, sliced his body in half, charged out of the fort against an onslaught of the entire guard, jumped a moat (which was not filled with water, but with hungry lions, tigers, and bears) on horseback, and escaped.

The most absurd part my day: seeing a scrolling LED screen on the non-mosque side of the Taj, where I read the air quality report for today. I knew exactly how much SO2, CO2, and whatever else was in each of my breaths. Very enlightening...

Posted by Colin Peterson at 2:03 PM